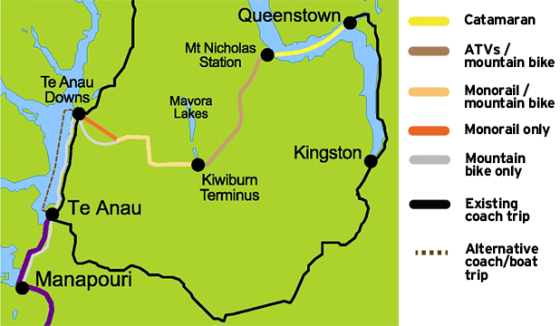 Stuff has this image and a story. As one can see the route doesn’t go into Fiordland National Park itself. I think this shows that the opposition is motivated mainly by the fact it bypasses Te Anau. But just as I don’t think one should not build Clifford Bay to protect Picton, neither should you decline consent for this project to protect Te Anau.

I think many tourists would love to travel via catmaran, ATVs and monorail through the farm and conservation land there. Competition is good, providing a choice of routes.

Patrick Smellie writes on the proposal:

To recap: for $179, the Fiordland Experience would ferry 160-plus passengers 40 minutes from Queenstown up Lake Wakatipu to Mt Taylor station. There, they’d board a bus for a 40-minute jaunt up a farmed valley flanked by bare or beech-covered ranges. There are some farm buildings, the occasional car, and some prized angling spots up here, and a sense of the back country emptiness that lies just beyond the bustle of Queenstown. This is all either on public roads or involves concessions from private landowners.

The next part is trickier. From the buses, tourists would be decanted into the carriages of a rubber-wheeled, electric-powered monorail for a 41-kilometre trip terminating at the ageing Fiordland Lodge.

With a 6-metre-wide corridor and up to 2m off the ground, the monorail will be narrower than a roadway, its promoters claim, and won’t affect forest canopy during the 29km of this trip that crosses government-owned conservation land in the Snowdon Forest Park.

The Department of Conservation and the Fiordland Experience have spent years working out a low-impact route, which does – let’s face it – put a monorail through a forest. DoC will charge for the privilege.

A forest park is not a national park. Its legal and conservation status is much lower and, therefore, potentially more acceptable – at least on paper.

While the monorail also cuts across a corner of the Unesco-designated Fiordland World Heritage Area, that designation has no legal standing and also covers a vast swath of the West Coast, including townships and other existing tourist hotspots.

If anything, the area lacks the grandeur in less reachable parts of the region and the only encroachment on the highly protected Fiordland National Park is the lodge site itself.

Smellie (who had his trip down there paid for by the promoters) has a useful suggestion:

Assuming Smith can get himself over the environmental, commercial and political hurdles – and that’s a big “if” – he should only contemplate permission subject to cast-iron commitments on both project funding and the removal of infrastructure in the Snowdon Forest Park in the event of its disuse.

I think that is fair enough. No one wants a dis-used monorail sitting somewhere. But I think the proposed route would attract many tourists domestically and internationally, and if investors are prepared to spend $200 million of their own money making it happen they should be given the chance.