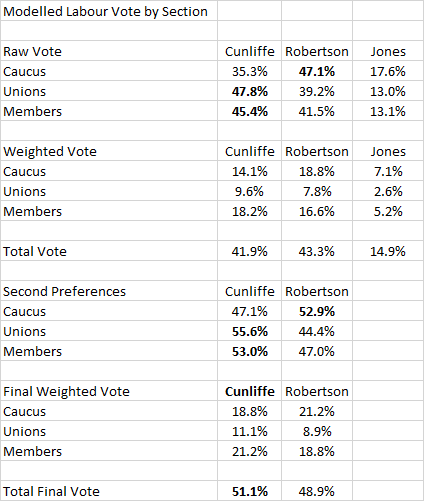 As always, treat the non-caucus numbers as highly speculative. The caucus numbers are more solid, but MPs have been known to swap sides, or say one thing and do another.

My models have Robertson ahead in the caucus vote, and Cunliffe ahead in the union and members vote. When you weight them together I actually have Robertson narrowly leading. However with Cunliffe picking up more of the Jones caucus second preferences, my model has a narrow victory to Cunliffe on the final ballot – 51.1% to 48.9%.

So if the model is in the ballpark (and it may not be), then either Robertson or Cunliffe can win. And the fact neither camp is claiming they have it in the bag, suggests they also think it is close.

So how can the three candidates win. Here’s what I think

The easiest way for Robertson to win is to pick up additional caucus votes. In fact just one MP swapping to him will get him over the line on this model. If the six Jones voters split 3-3 instead of 4-2 to Cunliffe, then he squeaks in.

The other path to victory for Robertson is to do better on the membership vote. I’ve heard that the voting turnout to date is low, just 14% as of yesterday. A low turnout would I think advantage Robertson as I think his caucus supporters will be better at getting their local members to vote.

Cunliffe has multiple routes to victory. On this model he is more likely to win. If he picks up a couple more caucus votes he is home and hosed.

Another route to victory for Cunliffe is the EPMU. He has the support of the four smaller unions. The SFWU is allowing all members a vote so hard to change their outcome. The EPMU however has around 50 voting delegates only and they carry around 7% of the total vote. My model assumes most EPMU delegates will back Robertson as he has some support from senior officials such as Paul Tolich. However it is quite possible the EPMU may vote the same way as the other unions, and if so Cunliffe gets in easily.

The third route to victory for Cunliffe is winning the members vote not narrowly, but by say over a 10% margin. If after preferences Cunliffe gets over 55% of their vote, it should also clinch it for him. For that his team need to make sure the Auckland based members vote in strength. The fact  600 to 700 members turned up to the Wellington meeting suggests Wellington may have a higher vote turnout per capita/member.

There is no route to victory for Jones!

So my pick is a victory for Cunliffe. However Robertson can win if get more caucus votes, and there is a relatively low membership vote. But  against that Cunliffe has multiple routes to victory and only needs one of them. The advantage is his.