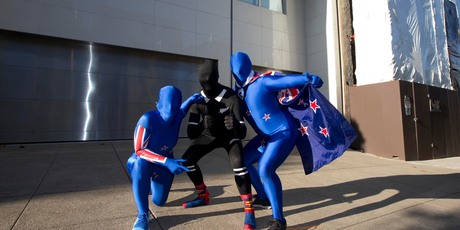 The Kiwis behind the dawn flag-bombing stunt at one of Larry Ellison’s San Francisco properties today said the operation took hours in the researching and planning.

A video posted online this morning of a trio, calling themselves the Kiwi ninjas, decorating Ellison’s garage with New Zealand flags has fast gone viral. The idea was dreamt up by a group of fervent Team New Zealand supporters over a few beers earlier this week.

One of the ninjas who donned the full lycra body suit, Cathy Odgers, said everything down to the type of duct tape they used to attach the flags to the garage door was thoroughly researched

“I think it would have taken five billable hours of planning the whole exercise,” joked Odgers, a lawyer by trade, “but the result was priceless.”

“We’d done a reconnaissance mission before that so we could get the logistics all nailed down.”

Odgers, who performed the stunt with builder Paul ‘Noddy’ Holmes, and Daniel Welton (aka the random from the Hawke’s Bay) said they were careful not to cause any damage to Ellison’s property, situated in the wealthy district of Presidio, which looks down on to the Golden Gate Bridge.

“It wasn’t a wooden door, it was a stainless steel – so it wasn’t going to mark or anything like that. We didn’t want his nice garage door ruined by duct tape. I made sure we picked the right tape as well, we spend a while researching that.”