NZ First has shut down some of its social media pages following a complaint about the leader of the party’s youth wing.

NZ First Youth leader Curwen Rolinson posted on Facebook that the party’s board of directors had tabled and accepted a complaint against his ongoing membership.

The board tabled the complaint on Monday night. It will be heard after the party’s convention this weekend.

Rolinson has been a member of NZ First since 2009, and was elected to the board in 2012 for a two-year term.

His post also said he had shut down the NZ First and NZ First Youth Facebook pages on instruction from party leader, Winston Peters.

“Accordingly, Winston has ordered ALL NZF social media pages to

be shut down till this complaint has been heard next Monday.”

The NZ First constitution provides the board will consider a member’s continuing membership of the party if the conduct of that person is “offensive, undesirable, inconsistent with the welfare and interest of the party, or contrary to the constitution”.

The board has the power to censure or fine, order compensation, suspend the member from some or all rights or privileges, or expel from the party.

Rolinson declined to discuss the nature of the complaint against him, but acknowledged there were screenshots of his comments circulating that indicated a complaint had been laid.

“But I would be rather remiss to comment on the accuracy of my own comments which have been screenshotted.”

He also said he would be rather remiss to comment on the screenshots, “but I am not actually criticising their validity.”

It is not the first time Rolinson has gone rogue on social media – he has previously commented offensively about a photo of Labour MP Jacinda Ardern pictured with a Young National member and also remarked on a post from NZ First MP Asenati Lole-Taylor which called the National Government’s reforms at the start of 2012 “[Social Development Minister Paula] Bennett’s Nazi welfare reform”.

Rolinson said he was not sure it was fair to compare National’s welfare reforms to the Nazis, because “Hitler, after all, had a stronger emphasis on job creation.”

Curwen does have a history of saying offensive stuff online, and it is not a total surprise that he has finally ended up in trouble over it. If he survives, it will be a lesson for him. I’m not aware of what has led to this specific complaint.

UPDATE: I understand the disciplinary proceedings may not just be about online behaviour. 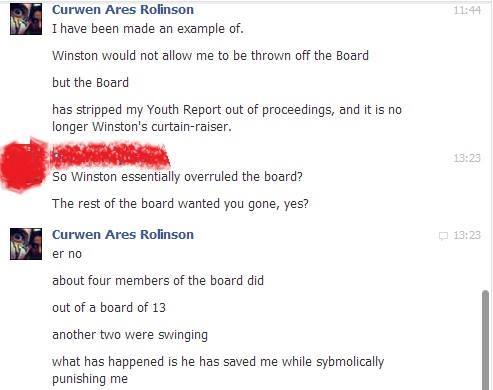 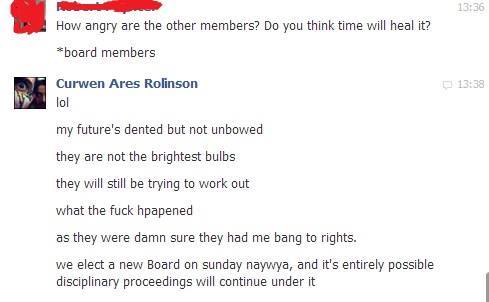 UPDATE2:: It seems part of this is over a complaint Curwen laid over another NZ First member, and the Director of Operations in the NZ First Leader’s Office. I’ve been forwarded an e-mail which was sent to the Parliamentary Service:

To whom it may concern,

I believe that an employee of the Parliamentary Service might have provided false or misleading information to the Service about his educational achievements.

Apirana Dawson tells people that he has a B.A. from Victoria University, yet his name does not appear on the Roll of Graduates. http://www.victoria.ac.nz/students/graduation/roll-of-graduates?firstname=&lastname=dawson

You may wish to check it out.

I have no knowledge of whether or not Api has claimed to be a graduate, or whether he is a graduate. But I am informed this was the basis of the complaint by Curwen to the NZ First Board against Api. The complaint was thrown out but I understand Api has resigned as a member of NZ First, yet remains Director of Operations in Winston’s office.