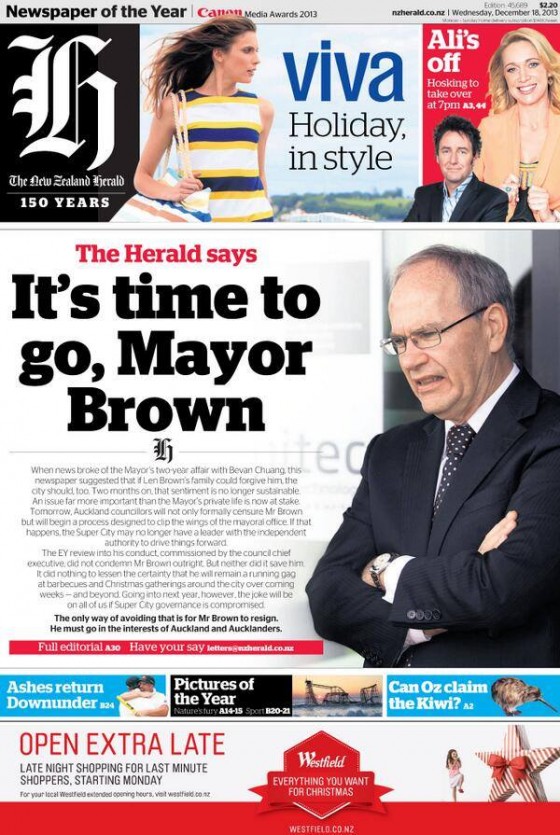 A front page editorial from the NZ Herald says what many others are saying – time to go.

The editorial is here.

When news broke of the Mayor’s two-year affair with Bevan Chuang, this newspaper suggested that if Len Brown’s family could forgive him then the city should, too.

Two months on, that sentiment is no longer sustainable. An issue far more important than the mayor’s private life is now at stake. Tomorrow, Auckland councillors will not only formally censure Mr Brown but begin a process designed to clip the wings of the mayoral office. If that happens, the Super City may no longer have a leader with the independent authority to drive things forward. The only means of avoiding that outcome is for Mr Brown to resign. He must go in the interests of Auckland and Aucklanders.

Also Brown now faces a motion of no confidence.

He also is unable to go out in public:

Earlier today TVNZ reported that Mayor Brown had been chased down the street by about 12 protesters, calling for his resignation.

“It’s not okay to root in the mayoral office,” “Where’s your dignity?” and “Shame shame shame,” the group chanted.

As the mayor was driven away the protesters ran after his car.

He can’t be an effective Mayor of Auckland. He is only hanging on for the perks.