The two leaders teed off on a sunny and breezy morning at a course at a military base on Oahu, the Hawaiian island where Obama is renting a vacation home. Key owns a home in Hawaii.

The golf outing put Key in rarified company. Obama is an avid golfer, but prefers to limit his playing partners to a close circle of friends and advisers. Among those who have also scored invitations to play with Obama in the past are former President Bill Clinton and House Speaker John Boehner.

According to one site, Obama has only played golf with another politician nine times of of 145 games (and five of those were Joe Biden). The fact he has asked John Key to join him for golf, is a sign of a significant personal friendship, rather than it being a political act. You host other leaders at the White House when they visit, you don’t play golf with them on holiday. 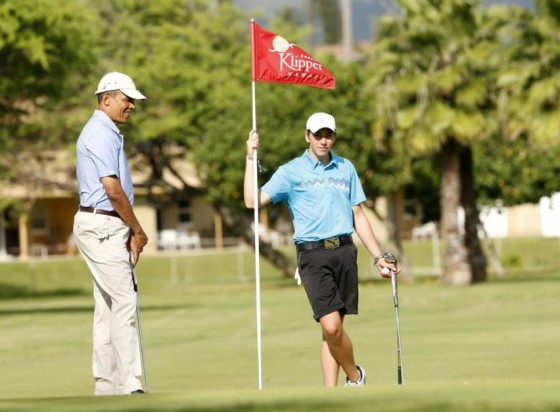 A nice photo of Max Key with President Obama. He has got tall! Most of the time it sucks having your Dad as the Prime Minister, but I guess sometimes it is pretty cool 🙂

It is worth reflecting that Key is exceptionally good at establishing personal relationships with other leaders.He has done it with Harper and Cameron who are also from the centre-right but also with Gillard and Obama, who are not. I also understand he has an excellent rapport with the Queen, as evidenced by the rare invite to Balmoral.

My theory is that Key isn’t fazed by anyone, and so when he meets people like the US President, or the Queen, he treats them much the same way as he treats everyone else – with some humour and as a person, not a position.

Some people got really excited that a junior sub-editor at the New York Daily News didn’t know who John Key was, when captioning a photo from the Mandela funeral. Well I guess if you have to choose between being known by a junior sub-editor, or the US President, I know which one I’d want 🙂

Anyway, we’re all waiting for the real news – what were the scores, and who won? 🙂

UPDATE: I understand that Obama and Key Sr played on the same team, and beat Key Jr and Nicholson.