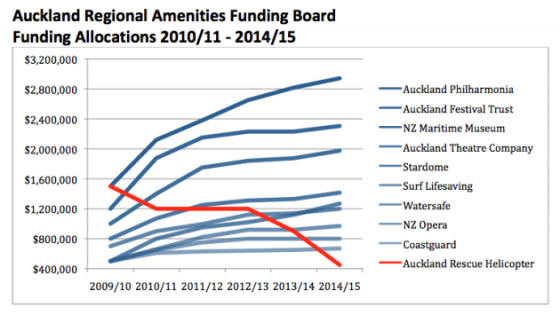 This graphs is very powerful. The starting point is the funding as set by Parliament, and the later years are what has happened under some local politicians.

Parliament initially said what each of the services should get – it was $1,500,000 each for the biggies, the orchestra and the rescue helicopter.

Since then, the board has cut money from the helicopter trust for its essential rescue service to give to the orchestra for new harps and pianos.

That’s right – more than $1 million has been cut from the rescue helicopter and given to the orchestra.

Now there are allegations by Murray Bolton – the chairman of the helicopter trust and all round good bloke – that members of Tizard’s dodgy funding board might have been accepting tickets to the orchestra, the festival, the theatre and the opera.

The board says it has a “gifts and inducements” policy.  The rule is that no member of the board can receive ANYTHING worth more than $150.  If they receive anything worth less than $150, the have to declare the gift or inducement.

But Tizard’s dodgy arts funding board is keeping its register of gifts and inducements secret.

They have a secret register???

The Auckland Rescue Helicopter Trust has accused the board that partly funds it of having a confidential gifts and inducements register.

Addressing a meeting of the Auckland Regional Amenities Funding Board today, trust chairman Murray Bolton suggested board members may have received free tickets from orchestra, theatre and opera businesses that they fund, and said it needed to make those gifts public.

The accusation comes in the middle of litigation by the trust against the board following big cuts in the funding the board provides the trust.

I’m against the litigation which I think is the wrong way to go. But I do think the helicopter service is quite right to make Aucklanders aware that their funding is being cut massively, with the funds going instead to the arts.

“We do not provide free helicopter joy rides for members of this funding board because ours is an essential service. We wonder if that has been our mistake.

“We wonder if free tickets to gala openings of the orchestra or the opera have been in play here.

“How is anyone to know? After all, you have refused to release your secret register of pecuniary interests. You refuse to tell us, the media, the mayor, or the people of Auckland just who it is that has been giving you gifts and why.”

Board chairman Vern Walsh said there was no secret register for gifts.

“We can’t make something that doesn’t exist available,” he said.

So it isn’t a secret register, but instead a non-existent register! I think that is worse!