Prime Minister John Key has announced the 2014 General Election will be held on Saturday 20 September.

“I’m announcing the election date well in advance as I believe this gives New Zealanders some certainty and is in the country’s best interests.”

“It is my practice to be up-front with the New Zealand public and provide plenty of notice about election timing.”

National will be campaigning on its strong record in Government and its plans to continue the good progress New Zealand is making over the next three years.

“I am proud of the work we have done to protect vulnerable New Zealanders and help strengthen families and communities through difficult times.”

Mr Key says, “I have already contacted the Governor-General to advise him of the election date.”

The Government’s intention is that the House will rise on Thursday 31 July and Parliament will be dissolved on Thursday 14 August.

Writ day will follow on Wednesday 20 August, and nomination day will be Tuesday 26 August.

This is two elections in a row that Key has announced the date months in advance, instead of what former PMs used to do and only announce it at the last minute to try and game some tactical advantage.

The 20 September date is to allow time for a Government to be formed and have whoever is Prime Minister attend the G20 connference in Australia, as it is the only time we have been invited to attend with all the “big boys”,

Meanwhile (Young) Labour have responded in all too typical fashion to the announcement: 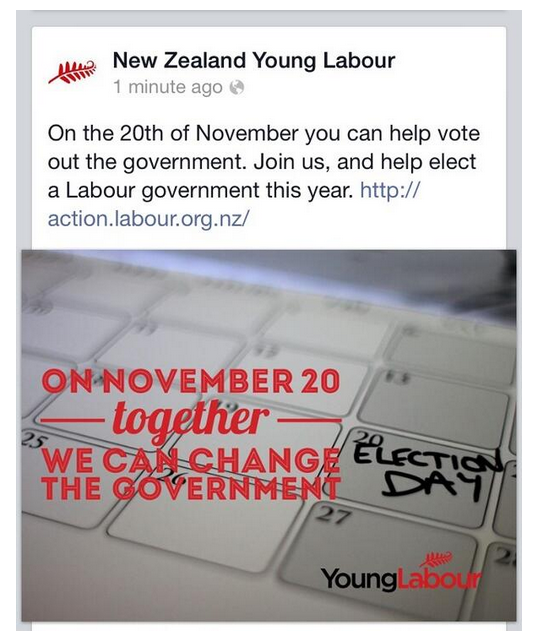 Oh dear, oh dear, oh dear. They really need to start introducing some quality control and checking to their infographics. Cunliffe tweets one that shows power prices shot up under Labour. Robertson tweets one that has a massive typo in it, and now Young Labour get the date wrong by two months! And they think they can run the country!!