The final day is a fairly big one. It’s 21 kms from Quintin Lodge to Sandfly Point. So another 6.15 am wake up for a 7.30 am start. Have a slight hangover from the mixture of whiskey and wine from the night before! 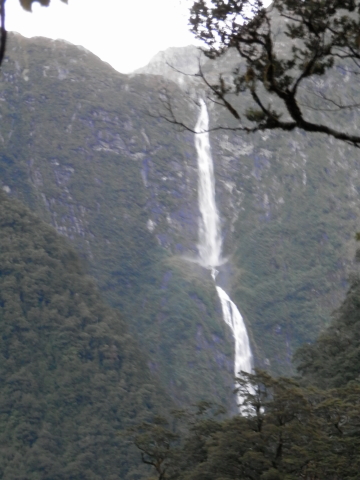 Just as the sun was starting to come up, you get a view of Sutherland Falls from the track. They really are quite massive. 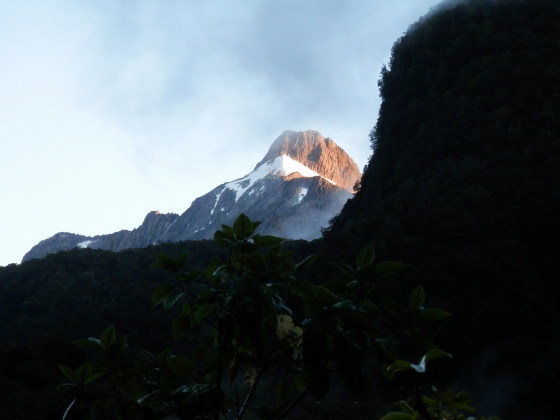 Some very welcome sunlight lighting up the snow covered peak in the distance. 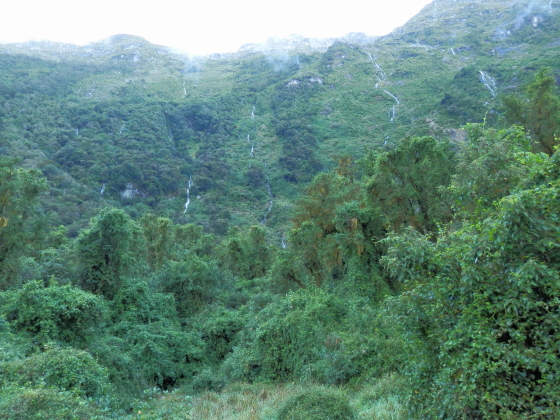 The nice thing about the rain the night before is the bush is more green. 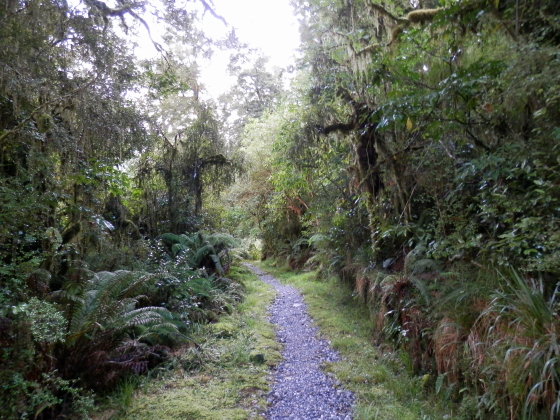 Most of the track on Day 4 is well maintained and easy to walk on. You learn tramping that the surface makes a huge difference to your speed. 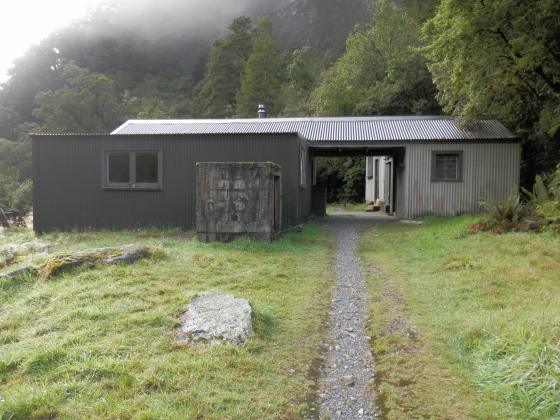 This is the boatshed, where we had morning tea. Before a bridge was built they used to use boats to cross the Arthur River.

Ultimate Hikes keep supplies in all the huts and shelters which means you get hot coffee, tea, milo and/or soup. I became quite an addict of Chicken Noodle Soup for morning tea and miso soup for afternoon tea! 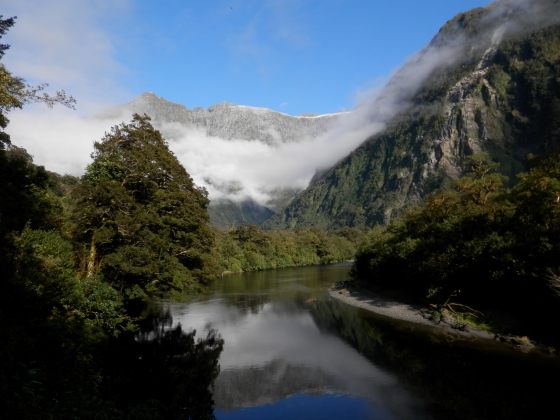 Most of the 4th day is next to the river. This photo gives some idea of how beautiful it is. But imagine 21 kms of such views. Wonderful. It’s like being in another world. 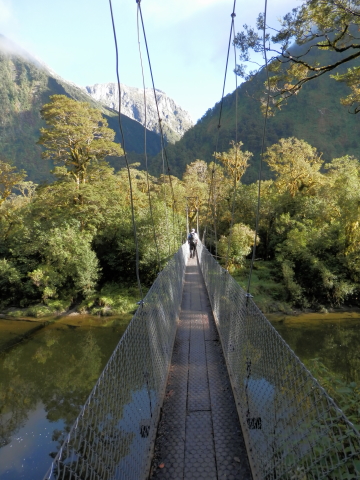 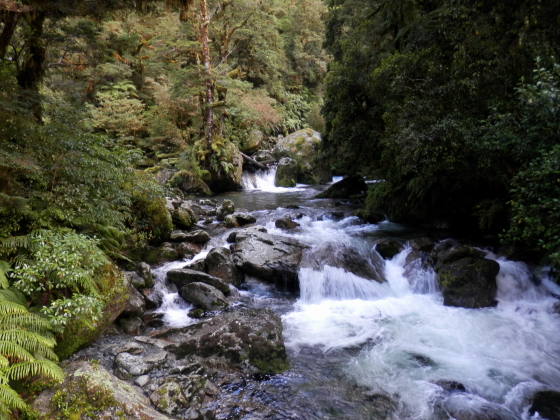 You can drink the water, and the taste can’t be beaten. 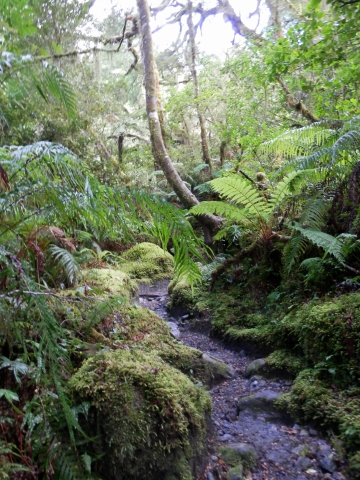 Around the halfway stage, the trail gets more rocky which slows you down. 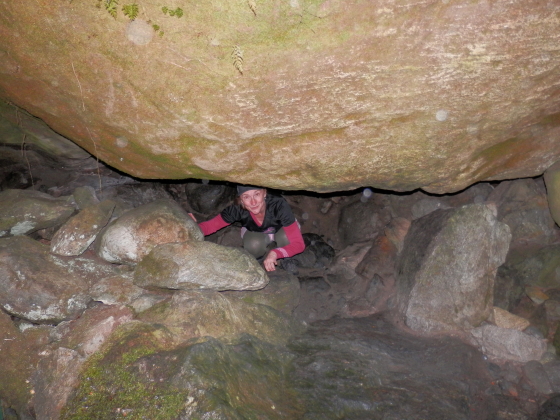 Smeagol looking for the ring. 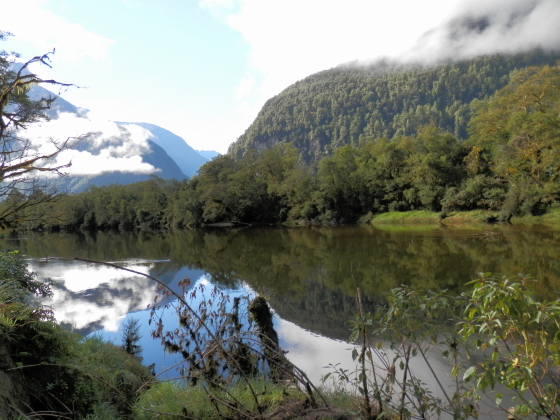 I never get sick of the river shots. 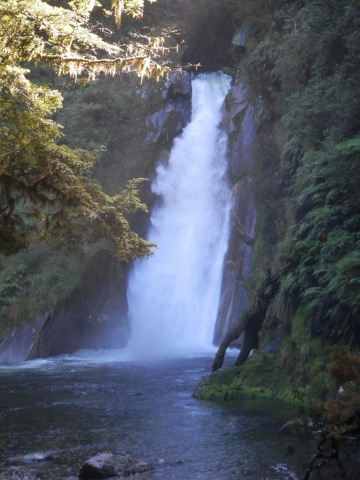 This is the Giant’s Gate waterfall, where we stopped for lunch. After a dare from Nisa, I dove in for a swim. It was the most painfully cold water I have ever gone into, and that includes polar plunges. I lasted around 12 seconds. Nisa then went in also, followed by the Japanese boys and a couple of the Aussies. The nice thing is that even without towels you dry off within five minutes as it was so sunny. 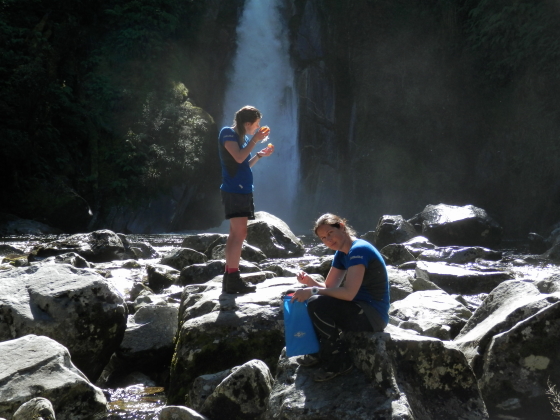 Guides Adie and Mel enjoying lunch. I’m sure all the guides are good, but we certainly struck gold with out three. They were friendly, helpful and knowledgeable. I have a reasonably fast walking pace so tended to spend quite a bit of time with the guide who was up the front (one would be at front, one at back and one goes between) and enjoyed the chats with them. I was quite proud I was keeping up with them, which got smashed when they then hit high gear to get to the hut in advance to open up – and suddenly they’d be going around 50% faster than me! 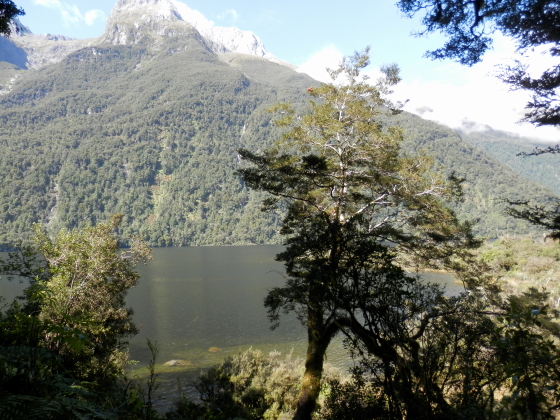 Snow , mountains and water are a great combination. 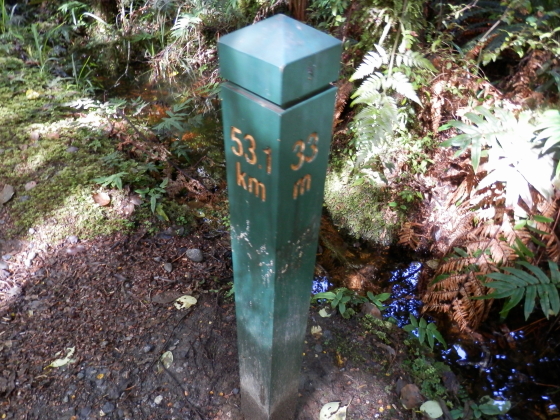 The Milford Track had markers every mile. This was the final mile marker before the end. 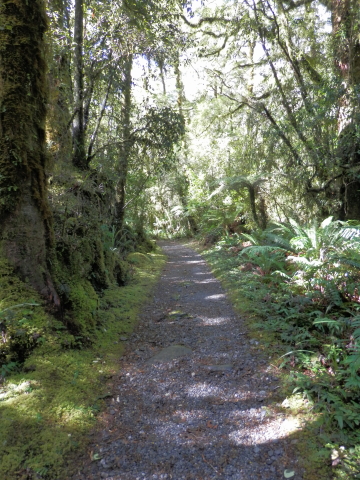 The final part of the track. This was originally laid by prisoners. The intent was to have them lay the entire track but one of them died so they had to stop 🙂 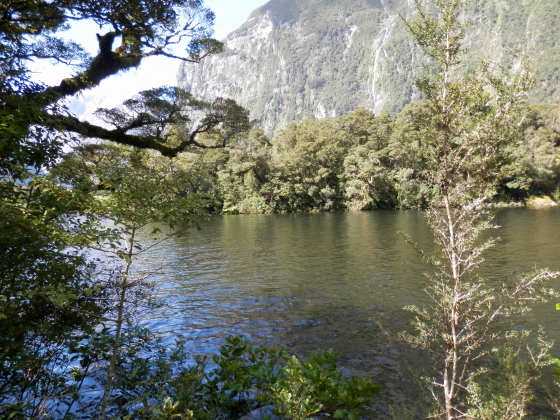 The view at Sandfly Point. 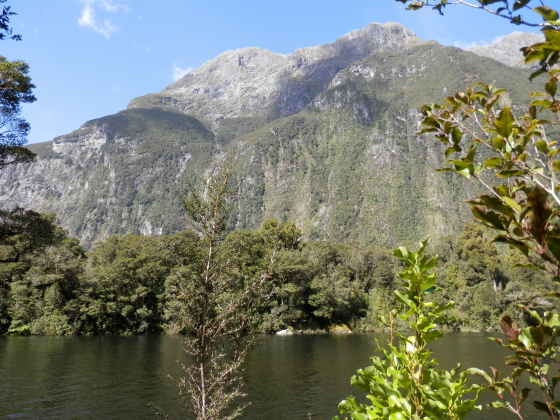 Another view from Sandfly Point. And yes the  sandflies are large and numerous. One poor Japanese girl was surrounded by at least 100 of them. 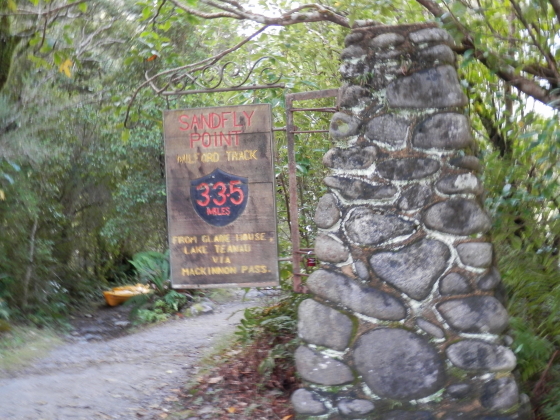 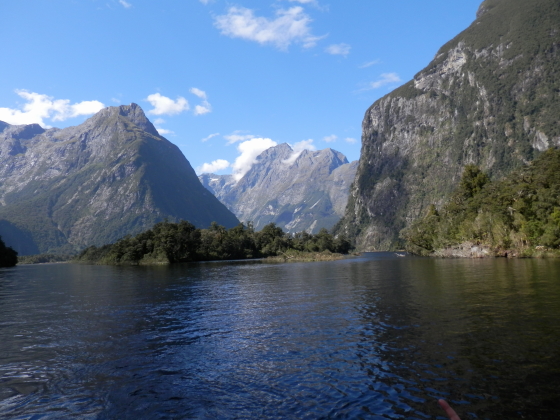 Then it’s on the boat to Milford Sound. 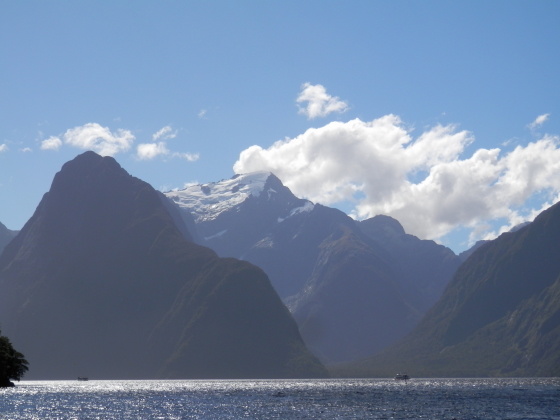 It’s around a 20 minute boat trip. Most of us sat on the front of the boat. 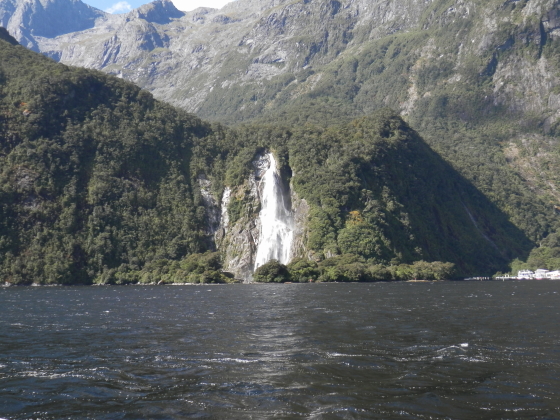 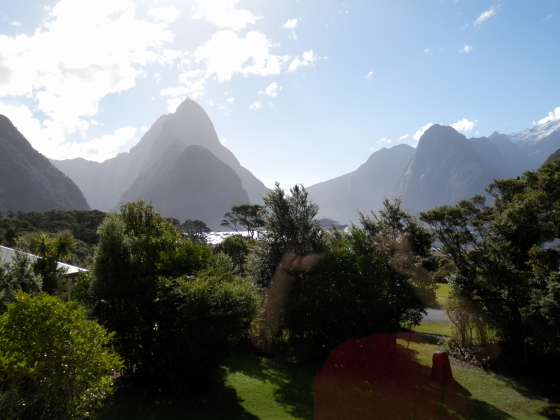 And finally the view from my room (forgive the reflection) of Mitre Peak, from Mitre Peak lodge. A great view to end the trek on.

That night we had the final dinner, swapping of e-mail addresses and general socialising.

The next day we had a cruise around Milford Sound, and then the bus back to Queenstown.

I was skeptical before the tramp about whether it was worth doing the guided option, as we did Heaphy and Tongariro unguided.  I basically went with the majority who were more keen to the “glamping” option. I have to say I have become a total convert and will definitely use Ultimate Hikes again when I do the Routeburn in two years time.

I wouldn’t do the guided option on tramps where you still stay at the DOC huts. Just having someone cook the meals for you and carry the food isn’t a big deal for me. I actually quite enjoy the feeling of self sufficiency.

But where they provide separate accommodation where you get hot showers, heated rooms, drying areas, a bar, flush toilets etc – well it makes a huge difference. You’re still tramping just as long a distance, but not having to spend hours crushed into a small hut with 30 other people and only a couple of tables.  The other nice thing with the guided is you do socialise much more with the  other trampers and get to form some good friendships with both trampers and guides.

Anyway that’s all three Great Walks done for this summer. Next summer I plan to knock another three off – probably Rakiura, Whanganui and Kepler. Then the summer after that will be Abel Tasman, Lake Waikaremoana and Kepler. I plan to do a few local tramps during the year also. The New Zealand outdoors is too great not to enjoy.