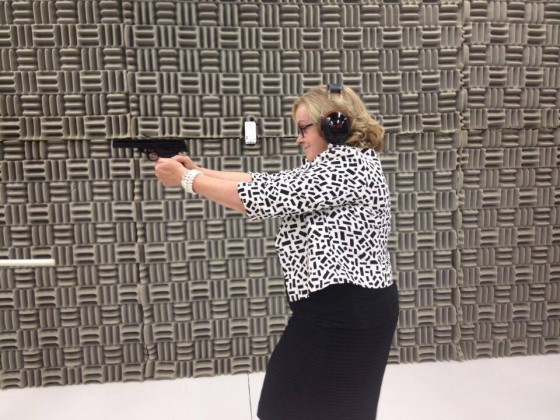 A photo op of Justice Minister Judith Collins firing a pistol has led to a complaint to the police watchdog.

The National Shooters Association said Mrs Collins had broken the law because was not licensed to the use the weapon and had shot a pistol outside of a gun club.

A picture of the minister firing the gun at an ESR testing facility last month was placed on her Facebook page.

When police said they would not intervene because Mrs Collins had been supervised at the time, Mr Lincoln wrote a letter to the Independent Police Conduct Authority.

He said he had laid the complaint because he wanted “one law for all”.

“We, as civilian gun owners, don’t want to have these laws imposed on us with what appears to be politicians taking liberties and exemptions that they’re not entitled to.”

How silly. She was under Police supervision. I don’t have a license but I’ve shot a gun under the supervision of someone who does.

He was also asked about Mrs Collins’ ownership of a taser, which usually required a special licence.

“You’d have to ask her. She’s never used it on me, so I’m not aware of her having one.”

Mrs Collins, a former Police Minister, said the taser was non-operational and was stored in a perspex box.

She said it could not be charged up, “although it would be tempting occasionally to be able to”.

UPDATE: I understand the complainant, Mr Lincoln, has filed a previous complaint against Judith Collins. He alleged she was wielding a taser without authorisation. In fact she was wielding a powerpoint projector remote control. Oh dear.