A transcript from The Nation:

Patrick Gower:  Good morning David Cunliffe and you heard the Finance Minister Bill English there say that the Government is happy with immigration settings. That is despite some of the highest figures ever – people flooding into Auckland and no-one leaving. What are Labour’s thoughts on New Zealand’s current immigration settings?

David Cunliffe: Well I thought the minister missed the main point which is the responsibility of any government is the total flows and New Zealand is well served when we get enough new migrants to fill our skill gaps but not so many that it overwhelms our housing market or the ability of our schools and our hospitals to cope. And we always used to try to manage to a zone of say between about 5000 and 15,000 net positive. They’re looking at 41, 42,000, that is just too much and it will overheat the property market even further.

We would manage net migration flows as far as possible to a steady, positive, predictable level that is sufficient for our housing market and our schools and our hospitals to cope with.

Yeah, well the easiest way to do it is to look at the numbers that are able to come in under different categories and just to manage the points system so you take the very best and the ones that are most suitable for the skill gaps and then you turn it back up again as either the homecoming Kiwi flow reduces or the economy starts to cool and you just have to manage it a bit counter-cyclically. Let me say also Labour has always been committed to an open and multi-cultural society and we welcome the contribution that our migrant communities make.

Labour have joined Winston in blaming economic problems on migrants. Now that isn’t to say that one shouldn’t debate what the correct level of migration should be, but claiming that you can reduce net migration by 35,000 through the points system is very deceptive.

Here’s the long-term arrivals by visa types since 2008: 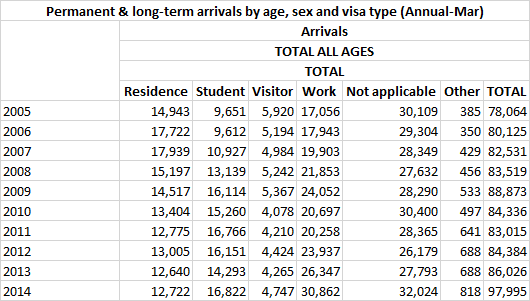 So migrants coming in a residence visa (the points system) are well down on previous years. They are 16% below the year to March 2008. You could scrap all residential visas and you’ll only reduce net migration by 13,000 or so.

Student visas earn us bucketloads of money.  They don’t give residency. They allow international students to study here, boosting the economy and providing a major funding source to schools and tertiary institutions. Is Labour saying it will cap student visas?

Work visas are up significantly. But these are also temporary, and are used to fill areas with a skills shortage – such as construction in Christchurch. You generally need a job offer.

So the number of permanent migrants to NZ gaining residence is lower than it was six years ago.

So why is net migration up? Well it is made up of four components. They are:

The first three categories can not be controlled by the Government. It is in fact a good thing fewer people are leaving NZ. Up until a year ago Labour was complaining too many are leaving.

Likewise it is a good thing many Kiwis are returning home. Even if we wanted to, we can’t stop that.

Also a growing number of Australians are moving here. I think this is a good thing also. Again, we can’t stop that – even if we wanted to. Unless Labour wants to abolish CER, and remove the right of Kiwis to move to Australia also.

So what has happened to numbers in these four categories. Here’s the data: 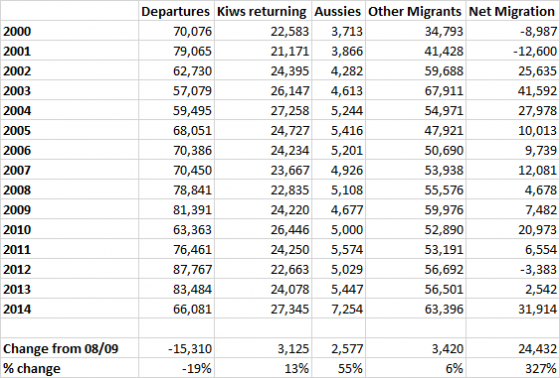 This is why it is the politics of xenophobia. Blaming migrants for the change in net migration is scapegoating. Their impact is minimal. The big change is in departures being down and Kiwis returning.

Sure one can have a sensible discussion on whether we should tighten up migration eligibility, but that is not a significant factor in the change in net migration over the past five years.

Also for those think that the migration is all from China, here’s the 2013/14 long-term arrivals by country of previous residence.