David Cunliffe has been careful to not rule doing a deal with the Mana-Dotcom Alliance to form a Government.  And despite the public statements about wanting to win te Tai Tokerau, multiple sources say the Matt McCarten is battling to give Mana the seat (and Matt helped set Mana up, and took over the Alliance from Mana)

What is fascinating is the number of Labour MPs who are going against the leadership, and condemning what Mana and Dotcom have done – in quick strident language.

First you had Chris Hipkins:

The good old days, when political parties formed from movements. Now all it takes is a couple of million and some unprincipled sellouts.

So Chris is calling Hone and Laila unprincipled sellouts. Then Kelvin Davis says what he really thinks:

@AndrewRiddell1 @NzMorningReport Bro, I think of the people of Te Tai Tokerau, not Sergeant Shultz. — Kelvin Davis (@NgatiBird) May 30, 2014

Interestingly Kelvin appears to have now deleted the tweet, but he calls Dotcom by the name normally used by Whale Oil.

Then we have former Labour Leader Phil Goff: 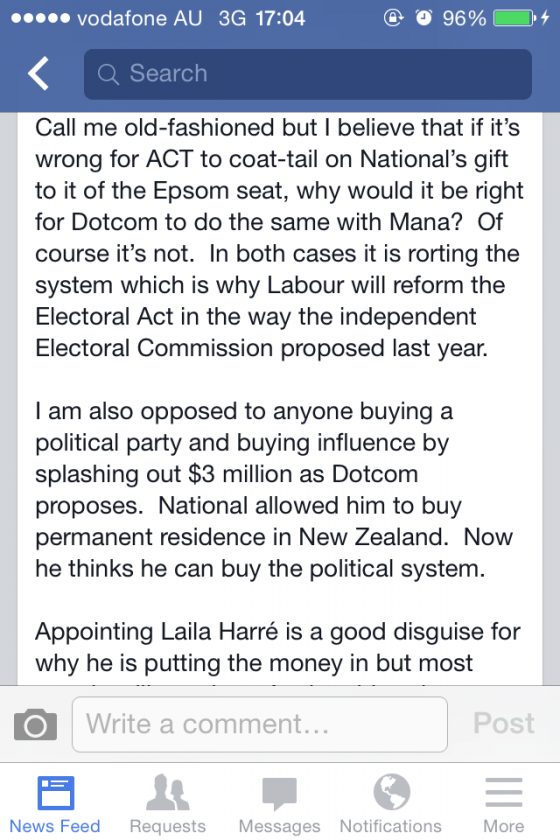 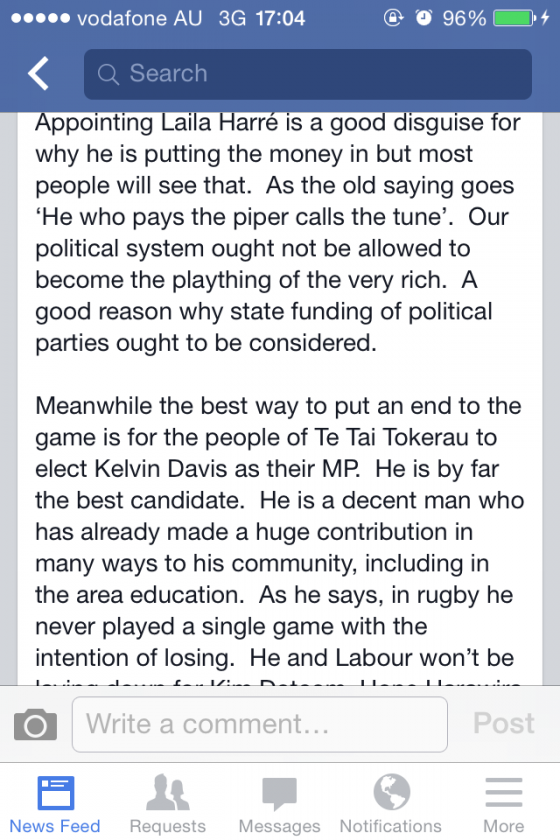 Goff says (correctly) Dotcom is trying to buy the political system. His Facebook post also appears to have now been deleted, so it looks like the leadership is trying to whip the caucus into line and stop them criticising the Mana-Dotcom Alliance. Because the more they criticise it, the harder it is for Cunliffe not to rule them out of a coalition.

I’ll be very very interested to see a poll in Te Tai Tokerau. I’m not sure voters there will be any more keen on Kim Dotcom purchasing a political party, than these Labour MPs are. David can win the seat by just campaigning on this issue. The question is – will he be allowed to?

Also of amusement is that the Internet Party Leader’s new press secretary is Pam Corkery, so it really is the Alliance being reunited. But what is very amusing is that Laila Harre only found out that Corkery was her press secretary while on radio:

And then after she got off air, Laila Harre made a phone call and found out that it IS true and pam IS her new press sec. lol.

Can’t make this up.