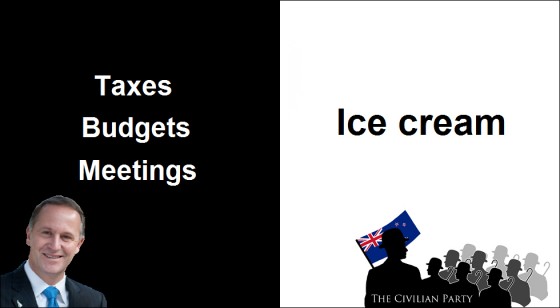 The first billboard of The Civilian Party. Love it. Some extracts:

We believe that New Zealand is the greatest country in Australasia, with the possible exception of Australia.

New Zealand is a place where dreams come true, particularly if those dreams are about drinking heavily.

New Zealand has a long record of great accomplishments. We’ve done so many things we can be proud of. We climbed a big mountain. We said no to new forms of energy because we were scared. We got bombed by France. We had a nationwide argument about whether to actively oppose segregation or watch a game of rugby. We gave women the vote. We went to war and lost a significant portion of our population. We crashed a plane in Antarctica. We had a Prime Minister who called an election while drunk.

But six years on, John Key has failed us.

The economy is performing well in some aspects, but poorly in others, the gap between rich and poor is growing faster than ever; earthquakes, hurricanes and floods have killed thousands*, and frozen L&P is a limited-time offer at best.
(*In other places)

To add to this, unemployment is high, innocent synthetic cannabis junkies are not, and our small country doesn’t even have the beginnings of a space program, unless you count the one time we all deliberately let go of our helium balloons. It didn’t occur to even one of us how we’d retrieve the cameras we put inside them.

It is clear to anyone who examines the record that this government is weak, it is tired, and its time has come.

But it is not simply enough that the Government needs to go. A strong and viable opposition is required, and this is something that our country is sorely lacking.

The Green Party, our nation’s main opposition party, once strong, has become shrill and petty, while the Labour Party remains adrift, with current leader David Cunliffe performing even worse in polls than the previous leader, a polite forehead.

Indeed, no one is doing well in John Key’s New Zealand; especially not the opposition.

But not all is lost. With the traditional vehicles of resistance fading, a new opposition rises from the ashes, one better equipped to echo the sentiments of a nation that barely knows what it’s talking about. That opposition is the Civilian Party.

I hope they get lots of candidates. Will make candidate meetings much more fun to attend.

And a final thought from them:

That crab fear is quite a worry!