Just got back from seeing Equivocation, at Circa. It’s on for two more weeks until Sat 21 June.

The play is about telling the truth in difficult times, with a fictitious setting of Shakespeare having been commissioned to write a play based on Guy Fawkes’ Gunpowder Plot. Does Shakespeare tell the truth about the plot, or the version the Government in the form of Sir Robert Cecil wants?

The cast has five men who play multiple roles each, and one woman – Tai Berdinner-Blades who plays Shakespeare’s daughter Judith. 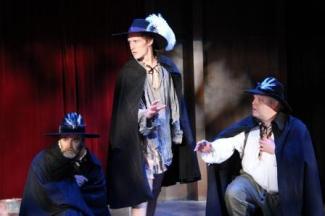 Andrew Foster plays Shakespeare – still grieving his dead son (Judith’s twin) and having to choose between choosing to lie or choosing to live.

And finally Gavin Rutherford is at his comic best playing Armin and many other roles.

It’s a long play, almost three hours long (including an interval). The first Act was a bit slow, but the second Act was fast paced and often funny.

The acting was first class, with all six cast playing their roles very well. The costume changes were non-stop, and the overall plot very cleverly done with many allusions to other plays – especially the Scottish one. It was a fun thought provoking night.