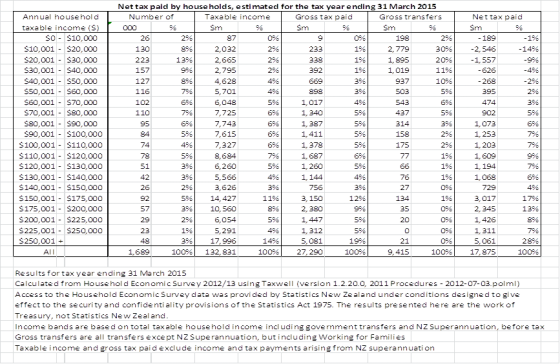 As Labour have decided that they need to penalise those earning $150,000 by taxing them more, I thought I’d remind people of how much tax they already pay. Households (which is not the same as individuals, but that is all we have data for) earning over $150,000 make up 14% of households. They generate 42% of taxable income, pay 50% of gross income tax and 73% of net income tax.

This table was put out by Bill English a couple of weeks ago.

It only deals with income tax, and direct welfare payments such as benefits, WFF, PPL and accomodation supplement. I’d be keen to see a fuller dataset that includes indirect taxes (such as GST) and also indirect subsidies (education, health etc).

As you can see households with income under $50,000 overall receive more in direct welfare than they pay in direct income tax. Their net income tax contribution is -30%.

It is households over $110,000 that then make up the $18 billion of net income tax that the Crown gets to spend on education, health, defence etc. Of course the Crown also gets company tax and GST.