The latest desperate go by Labour is to blame National for the recent killings in West Auckland.

The deaths have created a deep sense of unease.  What is going wrong?

What kind of country have we become when a dairy owner is killed in his shop at 7 o’clock in the morning allegedly by a child with a knife?

“The young accused were well known to local shopkeepers in a retail centre where begging, intimidation and anti-social behaviour have unfortunately been all too common.

“The community is asking why there has not been a more visible police presence, with regular foot patrols to discourage law-breaking. There is a community constable delegated to cover Henderson but the officer is based in Massey. We’d like to see a community constable based in the town centre, with a shop front on the main street.

The right have responded predictably.  Cameron Slater claimed that Twyford was politicising murder.  Obviously as far as he is concerned it is better for the causes not to be debated.

This claim is deeply hypocritical.  David Farrar during 2008 posted a series of posts suggesting that violent crime was worsening and implying that the fifth Labour Government was responsible.

Firstly I blogged on official crime stats, I never went blaming the Government the day after a (alleged) murder. That is sad and desperate.

As for the “suggestion” that violent crime was worsening, well here are the stats from Stats NZ: 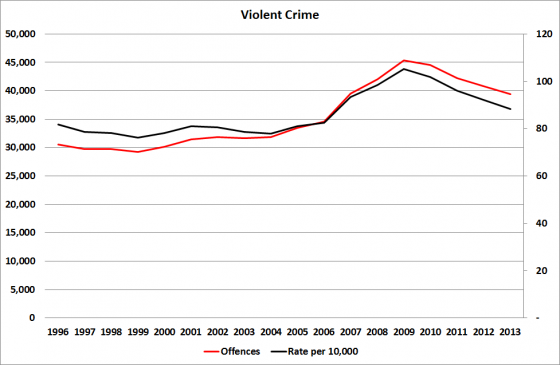 Doesn’t that tell a dramatic story.

The Government doesn’t control all, or even most, of the factors that cause crime. But it does control policy on sentencing, parole and bail, and also funding for Police and for rehabilitation.

As far as I am concerned there is a political element to what is happening out west and this is why this Government’s policies should be put under the microscope.  Potential causes include the following:

I think my favourite is that National offering $360 million to pay the best teachers more, so they can share their skills with colleagues, is somehow linked to the murder in West Auckland. And this isn’t some deranged anonymous blogger – but one of the closest advisors to the Labour Leader.

Incidentially see Mr Presland wants to play this game, there were 234 homicides (and related offences) in the last three years (2011 to 2013). In 2006 to 2008 there were 291. So does that mean Labour in its third term had failed to do anythng about poverty, policing, education and working conditions? And doesn’t the 20% drop in homicides then mean that those factors have all improved?

Of and finally, as Mr Presland is talking about West Auckland, I had a look at the violent crime stats for Waitemata Police District.

So I say bring it on, if Labour wants to start talking violent crime in West Auckland. It will be a great way to get them ever lower in the 20s in the polls.

I don’t think you can say that a lack of police resources contributed, on some level, to Mr Kumar’s death. I don’t think that police officers walking the streets would have stopped such a senseless crime. Whoever killed Mr Kumar had no compassion or respect for humanity, and I don’t believe that you could have prevented what happened by instructing a policeman to walk down the street from time to time.

Tragedies like the murder of Arun Kumar should not be politicised. We’ve seen politicians out in Henderson. Len Brown’s been there, the Auckland mayor. Labour MPs have paid their respects. But I think the Kumar family’s greatest support right now will come from the police, not from politicians.

I don’t want to see more police on the streets. I want to see better parenting in our homes. That’s where the issue of accountability lies. Children who are loved and nurtured don’t grow up to be killers.

Labour, I think, has picked the wrong fight on this.

I think it is just a sign of Labour’s desperation.