One section of Nicky Hager’s book stated I had organised a Princess Party, and had dialogue from some unnamed people about getting girls drunk, with an implication I was part of that conversation. 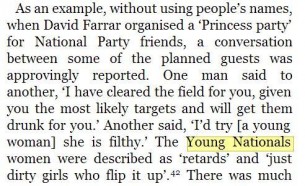 I was not the organiser of the party, and was not a party to the conversation. Yet Hager published this as fact. It is reasonably defamatory as various people have smeared me over it.

I did attend a party in 2011 in Palmerston North held the day before a party conference. I was not the organiser. I invited two friends along, of similiar age to myself. Off memory it was called a Princess Party, because the Royal Wedding was occurring around then. As a Republican, I’m an unlikely organiser.

The e-mails have been released by Whaledump, and I quote from then below. I’m redacting the names of the participants, but of course the source e-mails are on Whaledump.

my email doesn’t get read

Apparently Pinko is the main driving force behind the Princess party

Now this e-mail is presumably why Hager thought I was the organiser. But he gets it totally wrong. They are laughing at the fact that someone thinks I am the organiser. This is the problem where you write a book on stolen e-mails, and don’t verify, fact check, or interview a single person for it.

If Mr Hager is doing reprints of his book, I would appreciate it if he could make the appropriate corrections.

And perhaps this is a lesson to everyone out there, not to take everything in the book at face value. If he has got this wrong, what else has he got wrong? Again this is what happens when you don’t verify anything or give people a chance to respond.

UPDATE: I actually blogged on the party in 2011. To quote me:

Had a very fun night in Palmerston North last night (a sentence which some might say was unlikely to ever be uttered by me) watching the Royal Wedding. Yes I’m a Republican, but I can still enjoy a good wedding. The dress code was tiaras for women and black tie for men.

It was a hilariously mixed group of people. Three out of the five Kiwiblog editorial team were in attendance, plus I’d guess half the Don Brash coup committee. A wedding can be a good uniter

We also had members of the Monarchist League and Republicans, so it was a very good fun night. Debating the constitutional reform at 1 am is so much more tolerable after many bottles of champagne.

Somewhat sad that it was a party, and I’m debating constitutional reform at 1 am at it. Also a very different impression to what Hager’s book implied.