If you’ve heard enough about Nicky Hager’s Dirty Politics book and claims of Judith Collins’ leaking like a sieve to blogger Cameron Slater, you’re not alone.

Rumours doing the rounds on social media yesterday suggested a group of Young Nats in Hamilton might take matters into their own hands and dispose of a large stock of the dreaded book.

It’s not exactly on the same scale as the book burnings of the Nazi regime or the anti-communist McCarthy era but social media was yesterday buzzing with rumours of an imminent book burning at Waikato University.

The head of the Waikato Students’ Union and a former member of the Young Nats is alleged to have bought 202 copies of Hager’s book to burn.

Aaron Letcher has denied the claims, but the leader of NZ First Youth and a Waikato University source, who asked not to be named, said he did.

Letcher said the claims were false.

“There is nothing to it. I saw the allegations on Facebook by a NZ First person”

The Facebook page Letcher was referring to belongs to NZ First Youth leader Curwen Rolinson, who posted: “So apparently, the CNI Young Nats (and, assumedly, the NZ Young Nats) are buying up copies of Nicky Hager’s #DirtyPolitics . . . and burning them.”

His claims have been backed by a Waikato University student who saw the books in Letcher’s possession.

Stuff now runs as front page news (and lead story in the Waikato Times I believe) a rumour on Facebook, pushed by the former Head of NZ First Youth?

And people say there is a problem with standards on blogs!

Here’s what I understand to be the story from someone close to Aaron (Aaron has the flu).

It’s one thing for there to be a rumour on Facebook, but for Stuff to run this as a front page story without a single shred of evidence is just making shit up.

The hilarious thing is Aaron has done lots of stupid crap in his time. But this is not one of them.

I look forward to the prominent retraction by Stuff. Nah, just kidding. I’m not that much of an optimist. 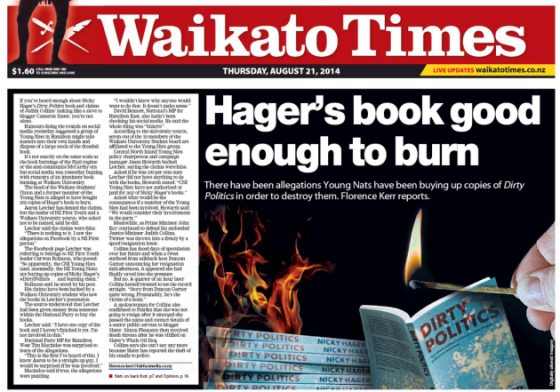 This is their front page story, taken from Whale Oil. They ran this as their major lead, with graphics and all – on a false Facebook rumour.

I’ve never complained to The Press Council about a story, and don’t want to start. But if anything ever qualified for a complaint, this would.