A reader asked if I could provide data on what spending increases have occurred under National and Labour, as Labour keeps blaming National for the increase in debt.

Considering that Labour have opposed basically every measure of spending restraint in the last six years, I’m amused they think attacking National for too much debt is a convincing strategy.

The reality is that Governments have relatively little control over how much revenue they’ll receive (short of major tax changes), but what they do control is spending. And the reality is once new spending is added on, it is very very difficult to get rid of.

So how much has spending increased in the last five years of National, and Labour before that. 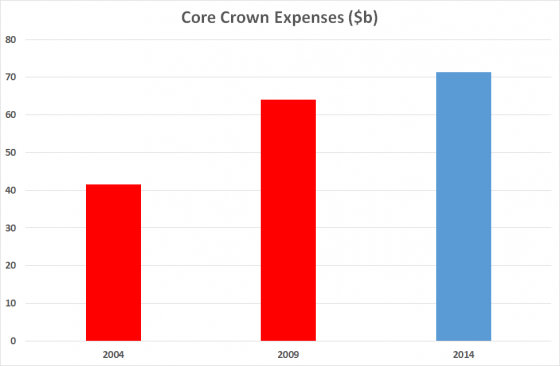 In 2004 core crown expenses were $41.6 billion. Labour increased them by a massive 54% over just five years to $64 billion. Yes 54% increase in five years. This is from the party that claims they will keep to the same fiscal track as National!

Do you think a party that increased spending by 54% in five years, will get NZ back into surplus? Even with all their extra taxes, I can’t see it happening.