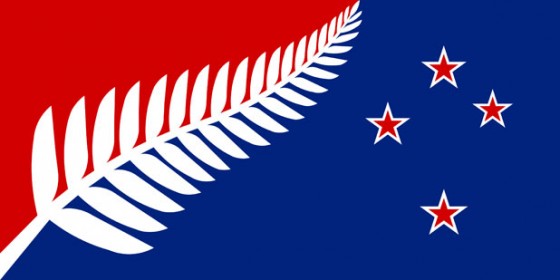 he first of two referendums on changing New Zealand’s flag could be held as early as next year, with a decision made in early 2016.

Prime Minister John Key used his address to the Returned Services Association (RSA) National Conference today, to lay out his case for a new Kiwi ensign.

Talking to media after the speech, he said he would be writing to the leaders of all other parties within four days to ask them to choose a representative to take part in a cross-party panel on the issue.

Key said he had received official advice that outlined a two-step referendum. It would see a public consultation period on possible designs.

The cross-party panel would likely pick the top three to five designs which would go to a referendum to pick the most preferred.

That would then be pitted against the current flag in a second referendum, where people would either vote to change or keep the status quo.

That advice still had to be considered and voted on by committee, but Key said he hoped the first referendum could be held before the end of next year, with a final decision by April 2016.

He gave an assurance to RSA members that New Zealand’s contributions to World War I would be recognised under the current flag at centenary commemorations in New Zealand and Gallipoli next year.

Key would not support any change that undermined the role of the defence force, but he did not believe a new flag design would do that.

“If you got to any of the Commonwealth war graves [in Europe] what you actually see on the war graves is the silver fern. It’s not the New Zealand flag.

“When people say New Zealanders were buried under that flag, that’s technically correct when the flag was on the coffin, but it’s not true in terms of being on their headstones,” Key said.

The silver fern has become a de facto symbol for New Zealand and New Zealanders. It is time we had it on our flag.

The Prime Minister had softened his preference for a silver fern on a black background, saying it was unlikely to be a popular option.

He had swayed more toward a design by Kyle Lockwood, which retained New Zealand’s current flag colours, with a Silver Fern and a southern cross.

My preference is still for the silver fern on black, as it would be as instantly recognizable as the Canadian Maple Leaf. However also a big fan of the Kyle Lockwood design and see both as vastly superior to the status quo.

I’d love to do a poll of 1,000 non New Zealanders and Australians, and show them the NZ Flag and Australian flag and ask them to pick which flag belongs to which country. I suspect the proportions getting it right will be barely more than the 50/50 of random guessing.