Grant Robertson has made his pitch for the party leadership, signalling a crackdown on banks, supermarkets and power companies and a plan to rebuild the party.

He is expected to launch his campaign in Auckland next week aiming to reverse the 2011 leadership launches where David Cunliffe overshadowed him.

As rumours swirled in the party that Cunliffe may withdraw, given Little’s hit on his union base, Robertson yesterday promised ‘‘a three-year programme to rebuild and reconnect the Labour Party as the driving force for progressive change’’.

The rumours over Cunliffe withdrawing have been around for weeks, but I’ll believe it when it happens.

But he defended key policies, saying Little had ‘‘possibly got ahead of himself’’ by questioning plans for a higher pension age, centralised wholesale power prices and a capital gains tax.

He endorsed aspects of former MP Shane Jones’ criticisms of supermarkets as one way to address issues that mattered to voters.

‘‘New Zealanders pay way too much for food  …  in a country where we produce enormous amounts of food. We need to look at supermarkets in the sense of the duopoly and what needs to change in the Commerce Act and how do we protect consumers,’’ he said. 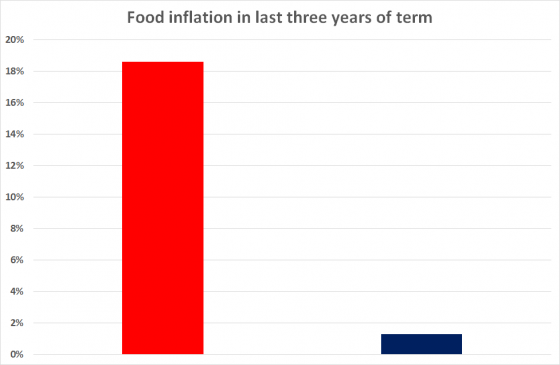 I remind people of this graph, when Labour start talking food prices.

Low pay in supermarkets was also a problem.

‘‘We say to the supermarkets, ‘you’re in our society this is how we want it to be’.’’

Does anyone else see the problem here? In one breath you say food prices are too high and in the next that you want to increase costs for supermarkets.

He said Labour did not make the argument for lifting the minimum wage, which he agreed with.

‘‘But when he went into workplaces  …  you could see the workers there were worried that their boss couldn’t afford the minimum wage.’’

But Labour first needed to build confidence and lift its vote to 40 per cent. It was easy for National to run a scare campaign about the Greens or Internet-Mana when Labour was on only 25 per cent, he said.

Lifting the vote from 25% to 40% is no small thing. That’s convincing 360,000 New Zealanders to change their vote to Labour.