This post draws mostly on material from the Congressional Budget Office (CBO) who conduct independent non-partisan analysis of budget and economic issues for the US Congress. All dollar amounts are in US currency.

Categories of federal spending
The National Priorities Project defines the categories as follows:

For example entitlements are mandatory spending whereas money spent on the US military is discretionary.

Why is the federal government debt of concern?
The inability of the US Federal Government and lawmakers to find a long term solution to its debt problem has made it a political hot potato for many years. The only President who has had any real success in modern times in bringing deficits under control was Bill Clinton. By working with like minded Republicans he managed to achieve surpluses.

The CBO has estimated that between 2014 and 2024 the annual deficits will be between $500-$960 billion adding $7 trillion dollars to the debt (assuming no change in policies). That would be in addition to the current accumulated debt of $17.8 trillion which is 72% of GDP and by 2038 will reach 100% of GDP if current policies remain in place.

The CBO when discussing mandatory spending expresses concern about the ongoing cost of entitlements:

CBO’s projections for total mandatory spending mask diverging trends for different components of such spending. CBO projects that, under current law, spending for Social Security and the major health care programs, notably Medicare and Medicaid, would grow from 9.8 percent of GDP in 2014 to 11.2 percent by 2023, driven largely by the aging of the population, rising health care costs per person, and an expansion of federal subsidies for health insurance.

It is these entitlements which are clearly in the most need of reform as the next graphic shows.

Federal spending in the 2014 financial year 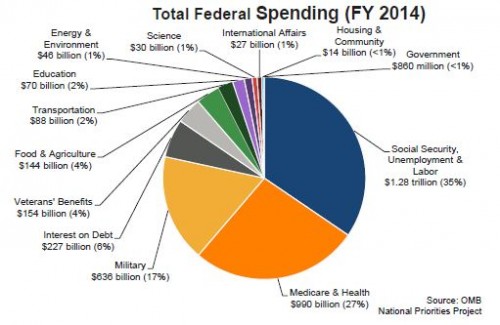 So out of $3,78 trillion in total spending $2.28 trillion was spent on Medicare and health plus Social Security and unemployment etc. That is 62% of all spending is on entitlements. No wonder the GOP don’t like the President’s progressive agenda! Also bear in mind  the CBO in its Long-Term Budget Outlook have calculated that entitlement spending and interest on the public debt based on the current law and policies will contribute to spending rising by 26% by 2039 .

Obama’s debt-reduction plan
In 2011 Obama released details of his plan which included proposals to increase taxes on the wealthy, eliminating loopholes and deductions. He also proposed modest changes to Medicare and Medicaid but none to Social Security. Finally there were also cuts in military spending.

Paul Ryan’s 2015 path to prosperity
Ryan who was Mitt Romney’s running mate in 2012 has released his own plan. The main features are:

Comment
So the battle lines have been drawn between Obama’s somewhat cautious approach to debt-reduction and Ryan’s much more comprehensive and bold approach. The Democrats of course will claim that Ryan’s budget plan will hurt those who need assistance the most and try to portray the Republicans as cold and unfeeling. The GOP argue that under current policies aren’t lean government and enough is enough. What they currently lack is someone who can effectively espouse their political philosophies.

The reality is that time isn’t on the US Federal Governments side when it comes to getting public debt under control. The longer the debt problem it is not tackled the harder the issue will be to solve. One thing is clear if the GOP control both houses of Congress after the mid-term elections they will put debt-reduction on the political agenda and pass Ryan’s plan. It will then be up to Barack Obama to decide his next move. Perhaps he could seek the counsel of Bill Clinton for tips on how to work with Republicans?

[UPDATE]: I forgot to make it clear that there are two classifications for US federal government debt.

The Debt Held by the Public is all federal debt held by individuals, corporations, state or local governments, Federal Reserve Banks, foreign governments, and other entities outside the United States Government less Federal Financing Bank securities. Types of securities held by the public include, but are not limited to, Treasury Bills, Notes, Bonds, TIPS, United States Savings Bonds, and State and Local Government Series securities.

The CBO uses the debt held by the public figure which is currently just under $13 trillion when calculating accumulated debt and the what the amount of GDP this is (72%). Intragovernmental Holdings is essentially the US government borrowing money from itself.