Had a very enjoyable Saturday night at the opening of Roger Hall’s latest (annual) pantomime at Circa. It was an enjoyable Wellington centric piss take of the old story, which was first published in 1697.

Gavin Rutherford plays the lead role of Grandma Hood with applomb. He is an old hand at playing these roles and his ability to ad lib adds to the humour – especially when he discovers the person he has picked out of the audience at random is also called Gavin.

Carrie Green plays her daughter, Dahlia Hood. Think of a red headed version of Paula Bennett and you’ll get the idea. Her and Grandma Hood are both keen on the same man – Sir Roger Bounder.

Bounder is the villain of the show, played by Patrick Davies. He wants to buy their homes and them turn Zealandia into a housing sub-division so their home values will increase and he makes a profit. The kids happily boo him everytime he is one stage.

Jane Waddell and Jonathan Morgan play Boris and Morris, and provide a lot of the comedic event. They’re ex MPs not on work schemes.

Simon Leary is Lance, the hero of the play – a DOC ranger. He of course wants to stop Sir Roger and win Red Riding Hood’s heart. 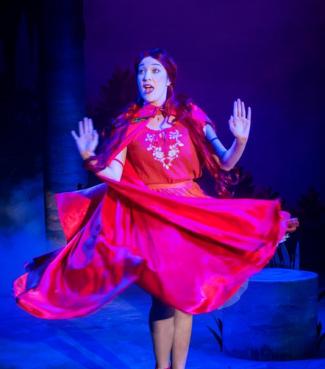 It’s a good cast, and a very funny script with lots of jokes for the adults – and many Wellington references.

Definitely a great play to take the kids to, or just to go to yourself if you want a couple of hours of laughs.