Greenpeace has incurred the wrath of the Peruvian authorities by unfurling a banner on the Nazca Lines which is designated a world heritage site by UNESCO.

Activists from the organisation placed a banner next to a figure of a hummingbird, carved more than 1,500 years ago. They were hoping to increase pressure on UN negotiators currently meeting in Lima. The Peruvian government said it would prosecute the activists who took part.

So what is Greenpeace’s justification for this stupid act?

“With our message from the Nazca lines, we expect politicians to understand the legacy we need to leave for future generations,” said one of the activists, Mauro Fernandez, on a video produced by the organisation.

That all sounds rather self righteous. The Peruvians aren’t amused.

They say the green group entered a strictly prohibited area and left footprints. The government is asking for the identities of those involved and threatening prosecution and six years in prison for the offenders.

A statement released by the group said: “Without reservation Greenpeace apologises to the people of Peru for the offence caused… We are deeply sorry for this. “We fully understand that this looks bad. Rather than relay an urgent message of hope and possibility to the leaders gathering at the Lima UN climate talks, we came across as careless and crass.

Despite the apology hopefully the culprits will be prosecuted.

UPDATE: Here’s a photo of the banner. 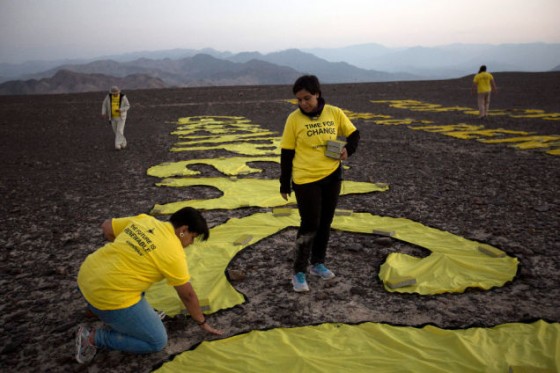