The Electoral Commission has published the spending by political parties on their party vote in the 2014 campaign. I’ve put them into a table to analyse how much each party spent in relation to each vote they got. 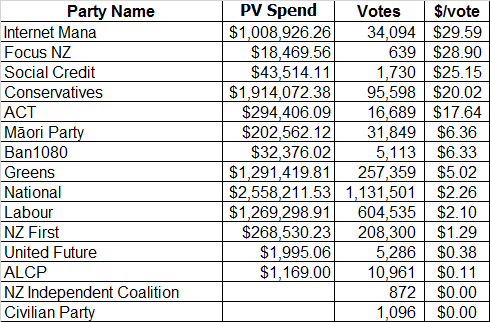 It is no surprise that Internet Mana had the worse result for its spend. A massive $1 million for just 34,000 votes. Great proof that money has relatively minor influence on elections.

After two of the joke parties that got under 2,000 votes, then the next worse was Conservatives who spent $1.9 million for 95,000 votes.

Just looking at the actual spend, National spent the most followed by the Conservatives, the Greens and then Labour. Yes the Greens spent more money than Labour! Labour really were near bankrupt.

Internet Mana was only the fifth largest spender. That is because much of their spending wasn’t on advertising, but paying candidates to stand for them etc.

This table takes into account the taxpayer funded broadcasting allocation each party had to advertise on television or radio.

The two joke parties has the worst result for their spend, when you take this into account.

Internet Mana and Civilian had around the same return at $32 a vote.