Circa’s production of A Servant to Two Masters has been my favourite show to date of 2015.

The play was written in 1743, and was adapted by award winning playwright Lee Hall in 1999. It may be 275 years old, but it is still hilarious.

The play has nine characters. They are: 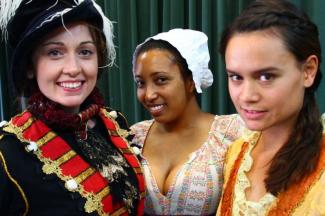 The star of the show is of course Truffaldino who desperately tries to earn money and feed himself, while serving both masters. He acts, sings, juggles and performs superbly. A very physical performance.

But the show is not just about Truffaldino. You have no less than three love stories in play, plus some grasping parents. Also of course is whether Beatrice’s disguise as her dead brother will be discovered.

The play runs for 140 minutes (with an interval) but not once did it seem slowly paced. In between the comedic elements, the plot advances at an intriguing pace.

Simon Leary as Truffaldino is the star of the show, but the whole cast performed really well, and Ross Jolly’s direction had the play flow very smoothly. Special mention must also be made of Kathleen Burns who excelled in playing Beatrice pretending to be her brother.

As I said my favourite show to date of 2015, and one I can recommend to anyone who enjoys a great comedy. It may be 275 years old, but good comedy is timeless.