Went to Spyfinger! at Bats last night. Was my first time there since their massive renovations (thanks Sir Peter Jackson) and it looks great. A larger and better located bar and multiple venues.

Spyfinger! is a parody of spy films, and they carried off their show with charm and a near zero budget. They are to theatre, what Southpark is to animation – done on the cheap, but very funny.

Instead of using actual special effects, they just verbalise them. So when in Iceland, and playing an Icelander they just say “Icelandic, Incelandic, Icelandic”. It actually works and is very funny. 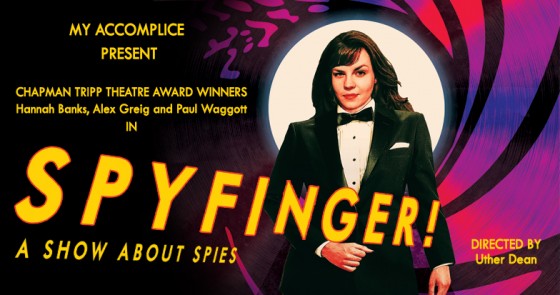 In a sixty minute performance they entertain through a series of puns and scenes. Some highlights:

It’s a fun wee show that doesn’t take itself seriously. If you’re a James Bond fan, you’ll enjoy this. It’s on Saturday 9 May, every evening at 7 pm.