Second Afterlife at Circa is a very smart production that resonates with the social media generation.

The play starts with a flat party. Most people are partying, but Dan is too busy facebooking the party, to actually be enjoying it. We all know a Dan! I was once a Dan!

The next day we see the various flatmates emerge (including from under a sofa!) and we learn Dan (Michael Hebenton) has hooked up with the dreadful Sadie (Mahalia Sinclair-Parker), much to the annoyance of flatmate Bea (Bronwyn Ensor), who appears to have a crush on Dan.

But this is not a Neighbours type soap opera. In fact the flat is soon left behind as Dan decides he has had enough of social media, and tries to delete his Facebook profile. This is harder than many would imagine, and as Dan battles with Facebook, he gets drawn into the Second Afterlife – a sort of Internet limbo where he is confronted with the memories of his past – both real and online.

Dan’s guide in the afterlife is the perky and slightly annoying The Guide (Ruby Hansen). Is she friend or foe as she leads him from You Tube to Bebo to Word of Warcraft to finally Facebook.

Dan’s friends Simon (Michael Trigg) and Ethan (Matthew Staijen) pop up regularly, along with Sadie and Bea. You learn more about all of the characters as the play progresses through its 75 minutes. Special mention must be made of Sinclair-Parker who really does well making Sadie that self-obsessed girl at school we all knew!

The set and lighting deserves praise also. You have two to three dozen (fake) computer monitors all hooked up through a very visual web. And each of them has an image projected onto them. It must have been incredibly challenging to set up and co-ordinate. Also very good was the music and sound effects by the on stage operator. Some of his whispers into the mike were the funniest scenes.

What I especially enjoyed about the play was the ending, as Dan realises who has really been there for him the whole way through. Not quite the ending you might expect, but very funny and satisfying. 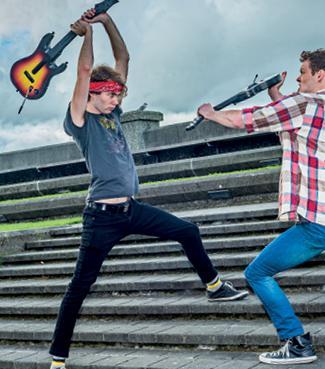 The play also had several fight scenes, ranging from Fight Kitchen to Air Guitar to World of Warcraft. The scenes were really well done and a highlight, managing to be both realistic and funny.

A very enjoyable play, that will appeal to the social media generation.