The average Kiwi household is $250 a year worse off because the Auckland housing boom has kept interest rates high, Labour has claimed.

With the Reserve Bank due to revise its 3.5 per cent official cash rate (OCR) on Thursday, Labour housing spokesman Phil Twyford has issued figures showing an across the board 0.5 cut would provide an immediate $725 million boost.

He says the analysis – which he admits is an assumption, given all interest rates would not immediately respond in a uniform way – reinforces his criticism of National’s “abject failure” to control soaring prices or build enough affordable housing.

“This is money that is currently going to offshore lenders. The whole country – households, consumers and businesses – are paying the price of the Government’s failure to fix the Auckland housing crisis,” Twyford said.

So Phil Twyford is complaining that under National the OCR is 3.5% and this is costing businesses and households too much money.

Let’s have a look at the history of the OCR: 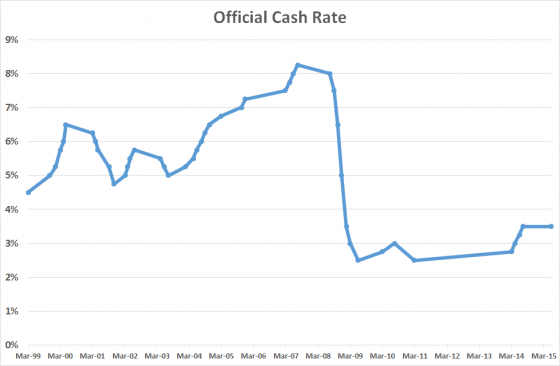 Yeah that 3.5% is just killing businesses and households. Labour never had it below 4.5% and even had it above 8% until they crashed the economy into recession (before the GFC struck).