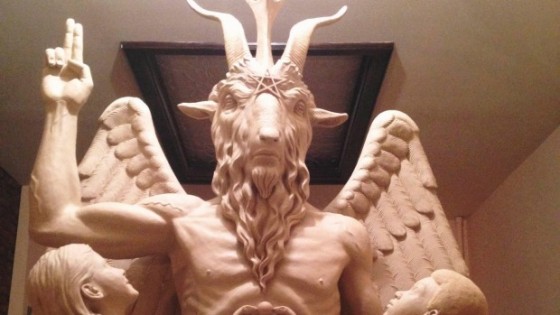 A Satanic organisation unveiled a controversial bronze Baphomet sculpture in Detroit just before midnight on Saturday, after trying in vain to have it installed near a 10 Commandments monument in Oklahoma.

Due to planned demonstrations, the group, which is opposed to Bible-themed displays on government land, kept the location of the unveiling of its 2.7-metre-tall monument secret until the last moment, when it emailed the information to ticket holders.

The Satanic Temple unveiled the one-ton statue at an industrial building near the Detroit River just before 11.30pm local time as supporters cheered, “Hail Satan”. Some of the hundreds in attendance rushed to pose for photos.

It could become a major tourist attraction. They could charge for entry, because I imagine most satanic temples are not open to the public.

Baphomet was originally a name given to an idol the Knights Templar were accused of worshiping by King Philip IV of France. Probably all trumped up charges as this is the same King who arrested the Pope and accused him of urinating on the cross.