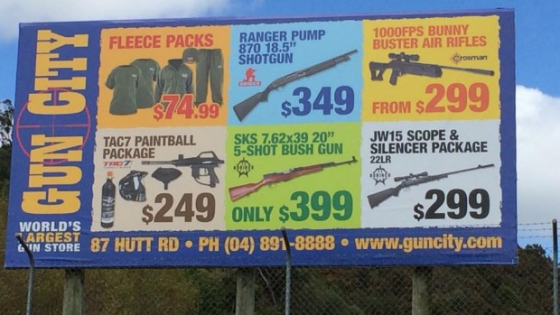 Labour MP Chris Hipkins is calling for gun advertising to be regulated in similar ways to tobacco after a spate of shootings in New Zealand.

The member for Rimutaka has labelled a Gun City billboard in the Lower Hutt suburb of Taita “disgusting” and says New Zealand does not need an “American-style gun culture”.

We don’t have one. Far from it.

But does that mean a legal product can’t be advertised? Farmers need guns for pest control. Hunting isn’t my thing, but it is for tens of thousands of NZers.

And would you also ban paintball adverts, which also featured on the billboard?

They are regulated. They must comply with NZ law, and also the Advertising Standards Authority codes.

Hipkins posted on his Facebook page asking if gun adverts should be banned? He also asked other Facebook users what they thought.

Banning advertising of things we disapprove of is not a good thing.