I’m the President of Prolife Auckland, which is a University of Auckland club committed to advocating for the rights and personhood of unborn children. I’m aware from reading Kiwiblog that you’re personally prochoice, however I think you’ll agree that the issues around ideological capture and groupthink are much broader than that particular debate, and I get the impression that you are generally supportive of freedom of expression.

By way of background, our club is setting up a scholarship to help pay childcare costs for solo mother students. We’ll be fundraising for this in the hope that we can help at least one young woman per semester through her students – obviously financial circumstances can be pretty difficult following the birth of a child. We like to think that our “pro-life” philosophy is pretty holistic so we’re putting our money where our mouth is.

We wanted to offer the scholarship under the auspices of AUSA and to get their support in promoting it, so I approached them sometime in October with a proposal. Imagine our surprise when the official answer we (eventually!) received was that they weren’t interested in helping us to help solo mothers. Given that their entire function is to serve the student population, I think it’s appalling they are prepared to allow ideology to get in the way of student welfare. I also don’t think it’s fair for the student union to hold itself out as representing all students when dissenting opinions are suppressed. It just goes to show, I think, that student union membership should be voluntary.

Oh, and by the way, I find it particularly ironic that this decision was made with the full support of AUSA’s President, Paul Smith, who earlier this year at the Auckland Writers Festival made a speech in his capacity as AUSA President on the absolute right to offend and to freedom of expression. The debate is mentioned here: https://www.auckland.ac.nz/en/about/news-events-and-notices/events/events-2015/05/auckland-writers-festival.html however further details can be found here: http://www.kathrynvanbeek.co.nz/blog/yes-but I quote:

“Paul Smith, President of the University of Auckland Debating Society, opened by pointing out that free speech is the cornerstone of personal freedom and democracy. He said that offense is subjective and that people have the option of not engaging with what offends them. Referencing marriage and gender equality, he said that offense can be a catalyst for change and that the veneer of protection against offense is often used as an excuse to shut down ideas.”

I’m pro-choice, but that doesn’t matter.  AUSA should not be refusing a genuine offer of assistance to students, just because they don’t agree with the views of the group. 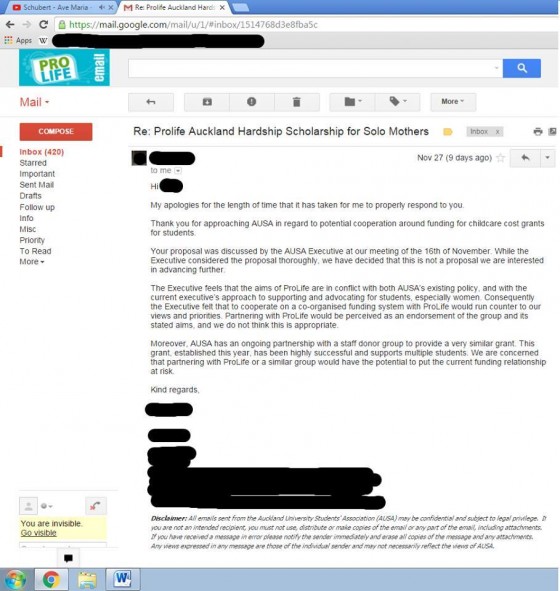 What this means is that an Auckland student who may have been able to get their childcare costs paid for, now won’t be able to, unless Pro-life can work around AUSA.