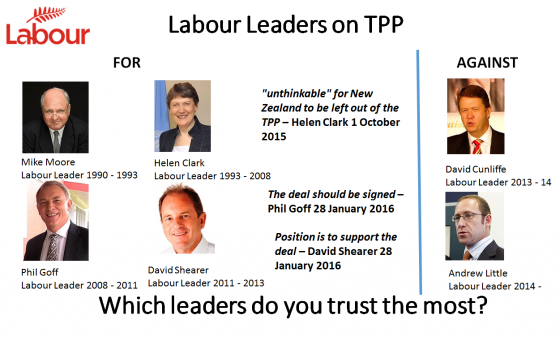 Every Labour Leader from the 23 years of 1990 to 2013 supports the TPP. Andrew Little is trying to dictate the union position of opposition and may have to sack his own foreign affairs spokesperson according to the Herald:

Labour MP David Shearer is set to be censured for breaking the Labour line on the Trans-Pacific Partnership after speaking out in support of the trade agreement.

Labour leader Andrew Little would not outline possible sanctions or comment on whether Mr Shearer could be stripped of his foreign affairs portfolio.

Does anyone think Moore, Clark, Goff and Shearer would say they support it unless they genuinely believed it was good for NZ?

But what it really shows is that Labour are not ready for Government. They remain as divided as previously. If you can;t govern yourselves, how can you govern a country?