Westpac Stadium’s boss is defending the enforcement of drinking rules at this year’s rugby sevens, after claims security was heavy-handed.

Some of a group attending yesterday’s first day were turned away at the gate by security staff, after they were breath-tested.

They’re breath-testing people coming into the stadium. And you wonder why no one wants to go. It used to be fun.

Wellington Mayor Celia Wade-Brown said the weekend’s event had been “excellent”, and she judged the increased family focus a success.

Organisers had tried to boost crowd numbers by moving the event to earlier in the year, offering cut-price tickets and incentives for families to bring children, she said.

Bringing kids?? It’s a two day event. I doubt many parents want to have tired and grumpy kids with them at the Sevens. 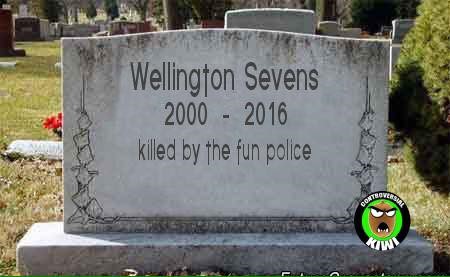 The Sevens is dying, and it is self-inflicted. What was a legendary Wellington event has been killed by the fun police.