Among moderate Labour MPs and activists, and even the odd union boss, talk is now incessantly about the party’s leadership.

Alarm has been raised after Labour’s private polling showed it was down to just 30% in February, from 35% before Christmas.  Worse, those voters have not gone to the Greens but slipped back to National so that the gap between left and right is now wider than a month before Labour’s last election debacle.  Since Helen Clark’s fall, only under David Shearer’s more centrist leadership has the Labour-Green bloc regularly polled above National and its minor allies. 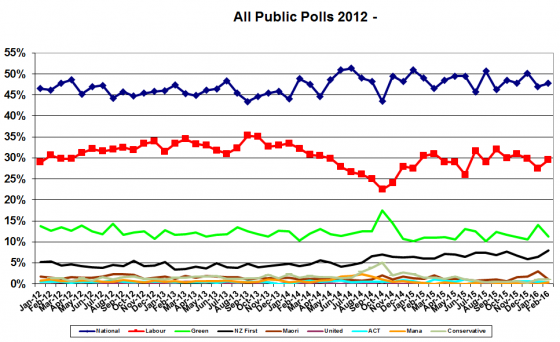 These issues have in common that all three were so-called “captain’s calls.”  This has raised concern not just about today’s polls but also whether the current captain, Andrew Little, has sufficient feel for public opinion in West Auckland, Redwood, Shirley or provincial New Zealand to ever mount an effective challenge to John Key.  After all, Mr Little’s entire professional career has been Wellington-based, first as a paid student activist and then as a union and Labour Party official.  His forays to stand for election in 2011 and 2014 in his birthplace of New Plymouth, a strong Labour town under long-serving MP Harry Duynhoven, have both been disastrous.

Labour’s frontbench is dominated by Wellington based professional politicians.

Moderate Labour MPs believe the party is marching to another debacle next September.  In response, Little loyalists have begun talking about “the Kirk model,” noting that the revered Norman Kirk took three elections as leader of the opposition to become prime minister. Similar tolerance, they say, should be granted to Mr Little to allow him to claim the prize after Mr Key retires.

So their cunning plan is to win power in 2023, and govern for one term, before allowing National back in. I like it!

This is all largely academic because it is dawning on even Mr Little’s strongest internal critics that there is no way of dislodging him anyhow.  Mr Little only had first-round support of four of Labour’s MPs and a quarter of its members. He ultimately owes his leadership to Wellington union bosses exercising their influence over the final tally.  Labour MPs know that, if they seek to roll their beleaguered leader, the Wellington union bosses will just impose him back on them anyway, prompting an unrecoverable crisis for the party in its 100th anniversary year.  No one is yet that reckless.

In his speech, Mr Parker focused on issues of capital allocation, making the case, without using the dreaded words, for a capital gains tax – an unmistakable challenge to Mr Little’s “captain’s call” that Labour should drop the issue.

Further contradicting another of Mr Little’s “captain’s calls” – that Labour must take a firmer line against the wild west of the business world – Mr Parker then argued cogently that capital raising in New Zealand is currently overregulated.  He made the case that the law goes much further than necessary to require proper disclosure of risk, that prospectus and audit costs are too high and directors’ liability excessive.  Such overregulation, Mr Parker says, is preventing medium-sized firms from attracting both capital and governance talent, hampering economic growth.

At 3000 words, the speech was designed to be the kind of substantial effort one might expect from a Birch, Cullen or English in contrast to Mr Robertson’s vapid efforts.  Mr Parker was disappointed it didn’t get more attention.

Of course, who can foretell the future?  It may be, as Little loyalists insist, that Labour will move up in the March polls as students return to their campuses to discuss the tertiary education bribe.  But if the polls again move the other way, it is poor Mr Robertson who dissatisfied MPs plan to target for the chop.