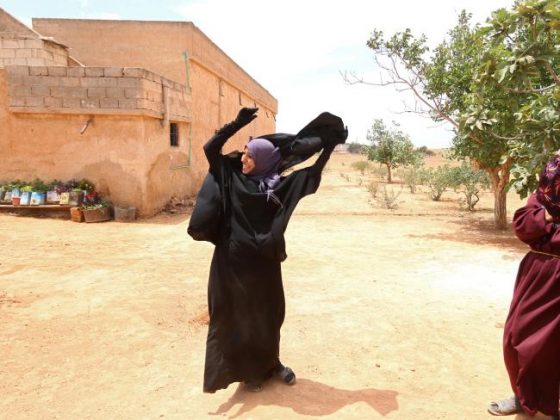 A woman removes a Niqab in her village after Syria Democratic Forces (SDF) took control of it, on the outskirts of Manbij city, Aleppo province.Source:Picture Media

The sight of freedom.

MASSIVE crowds of people are dancing on the streets, singing triumphant songs and clapping while they jump.

They’ve just been liberated from more than two years of oppression under Islamic State, and words can’t even begin to describe their joy.

Last week, Nineveh Council announced Iraqi forces had fully liberated the north city of al-Qayyarah from IS control and raised the Iraqi flag over its buildings. …

Meanwhile, the people of Manbij in Syria have also been liberated from the terror group.

Women are triumphantly ripping off their niqabs — the black face veil they were forced to wear under IS rule — and burning them on the ground.

Men are cutting each other’s beards off with scissors in rejection of the terror group’s decree ordering all men to stop shaving under sharia law.

I’m very proud that New Zealand is playing a small part in helping liberate these people.