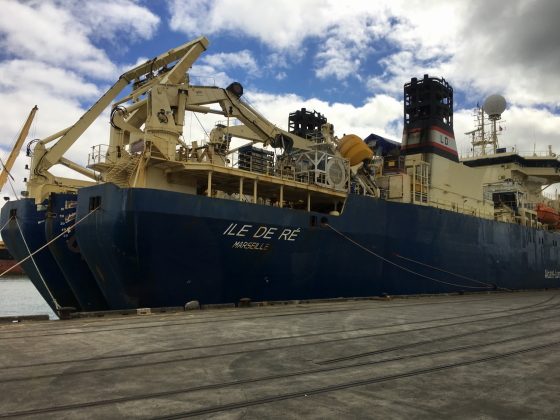 Got to tour the Ile De Re at Ports of Auckland on Tuesday, courtesy of Spark. The ship is in port for a couple of days before heading back to the Tasman Sea to lay the second half of the new Tasman Global Access cable. 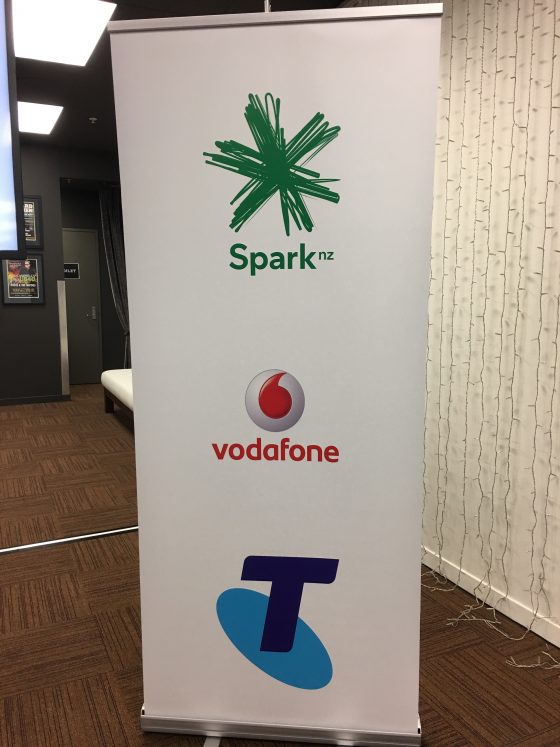 The cable is a joint venture between three companies who normally are fierce competitors (well two of them anyway). It will be 2,300 kms long and go from Ngarunui Beach in Raglan, to Narrabeen Beach in Australia.

The cable capacity is 20 terabits a second. To put this in comparison the Southern Cross Cable started off with capacity of 120 Gb/s and even with upgrades is now at only 3.6 Tb/s. 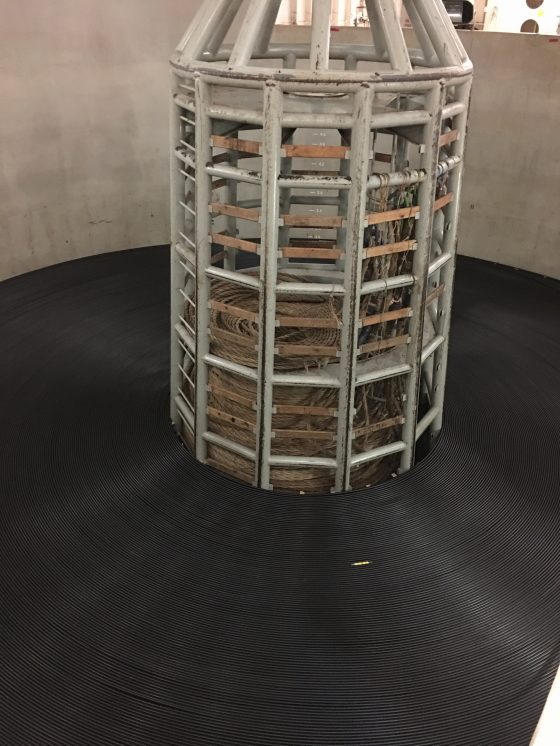 The tour of the ship was fascinating. They have three containers that can store 500 kms of fibre each. This is one of the tanks.

The fibre is put manually into the tanks. A series of people walk it in backwards, so they walk backwards for 500 kms! Also to make it even more challenging the fibre gets taken to a pacific island on a freighter from France, offloaded there and then wound onto the ship once it arrives, so that’s a lot of walking! 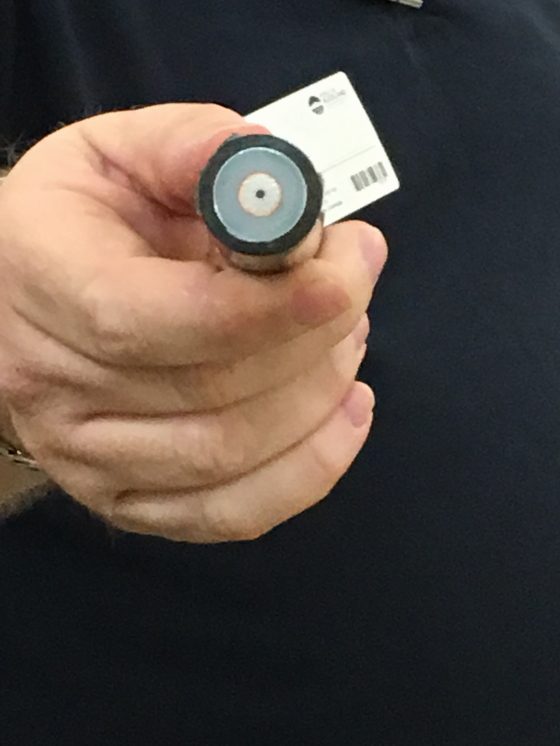 You think of submarine cables as huge wide cables, but fibre ones are much thinner. It is only 20 mm wide. 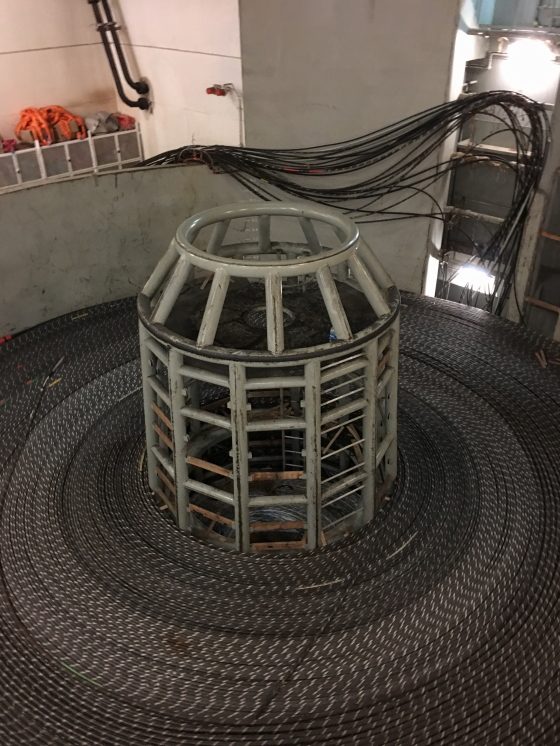 The Ile De Re maintains dozens of cables in the South Pacific – over 50,000 kms of them. In this chamber they have all the different spare segments so they can go out and repair a cable immediately if needed, rather than go into port to get it. 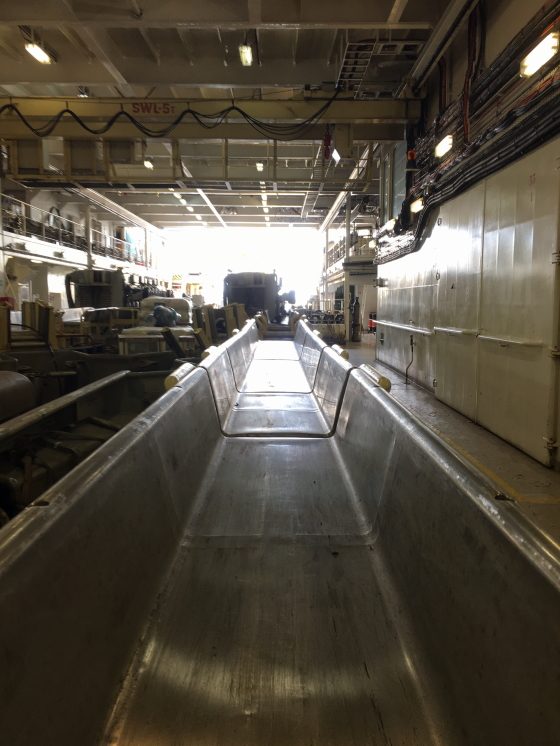 The cable is fed up from the chamber and along here to the back of the ship. 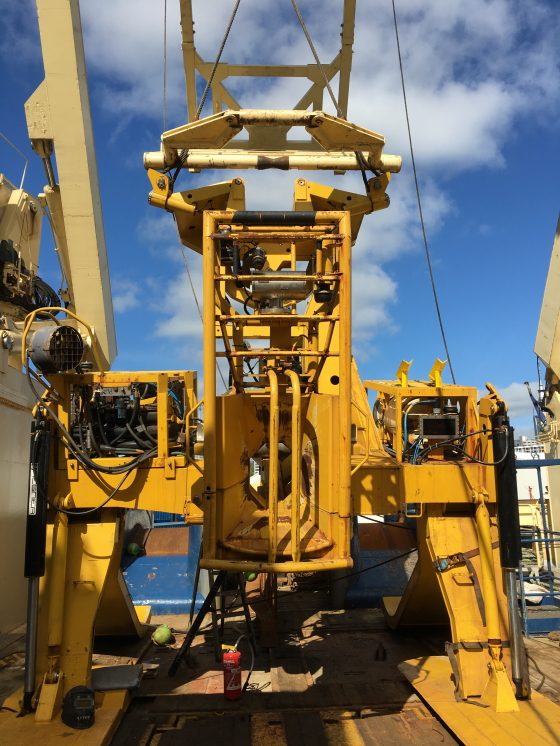 This wee bugger weighs around 25 tonnes and is used to bury the cable in the shallower waters. If the depth is under 1500 metres, this is thrown off the side and used to bury it around 1 metre down.

When out in the open ocean, there are a lot of engineering calculations to work out where the ship should go and at what speed, to get the cable down where they want it. The cable may only hit the bottom 30 to 50 kms behind the ship. 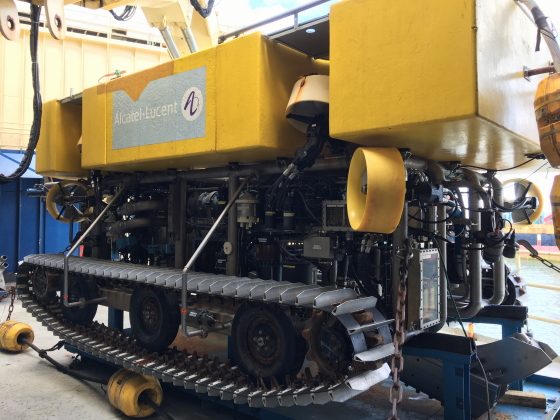 I nicknamed this Thunderbird 4. It is a robotic aquatic vehicle and is used to lay and repair cables in shallower waters. The advantage over the larger unit is that it has little weight in water due to the flotation devices so you don’t have 25 tonnes moving over the seabed.

In shallower waters they tend to lay one km per hour while in deeper water they can do 11 kms a day or so. 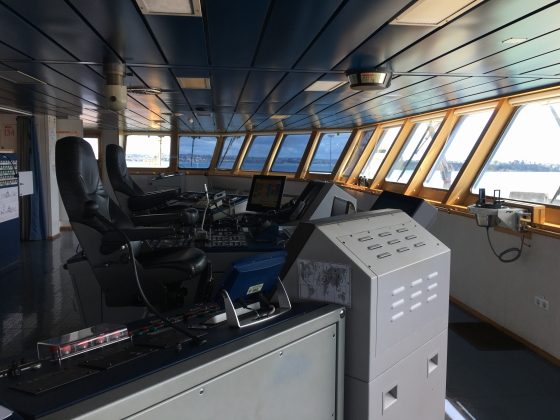 This is the bridge. This front part is where they navigate, but at he rear they have all the computers for plotting the cable location etc.

The ship has up to 60 crew on it at peak capacity. Most of the officers are French and the crew are Filipino.

It is an expensive exercise laying a submarine cable. Of the total $100 million cost of the project, the vast majority would be the actual laying.

Around 50% of our international bandwidth is now with Australia and it is projected to grow by 11,000% over the next decade. So this cable will be an important addition to our capacity, and will also provide greater redundancy in case of failure with Southern Cross (itself unlikely as it has two cables).

There is an existing cable called Tasman 2. It has such small capacity it can only handle 1% of trans-Tasman traffic. It will be decomissioned once TGA goes live in hopefully very early 2017.