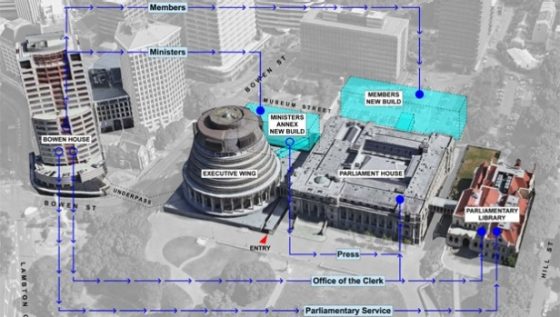 NZ First has broken ranks over plans for a new office block to house government ministers and their parliamentary staff.

Parliament’s Speaker David Carter says Cabinet has approved in principal plans for a $100 million building to rehouse MPs and staff once the lease on Parliament’s Lambton Quay offices expires.

NZ First would rather have the taxpayer pay $6 million a year rent to a foreign landlord rather than have Parliament own its own buildings!!

The current interest rates on Treasury bonds is just over 3% a year so the effective cost of the new buildings is $3 million a year. There will be operating expenditure also but looks like it will clearly be cheaper.

The plan involves the construction of a $100 million five storey, 8500 square metre building for MPs on the carpark behind Parliament House. There will be an air-bridge linking the new building to Parliament House.

The existing Press Gallery building, which is earthquake prone, will be demolished and rebuilt with two extra storeys added to it to house ministers.

Will the gallery go into the new building or will they regain their long ago treasured offices in Parliament House itself?