The news that billionaire investor and Trump supporter Peter Thiel has acquired New Zealand citizenship has triggered questions in Parliament.

The surprising news of Thiel’s Kiwi citizenship, first broken by the Herald yesterday, has drawn international attention with the New York Times, Mashable and Gizmodo noting the development.

“I can’t imagine someone of Thiel’s stature and wealth and not being noticed for five years, it just doesn’t seem very likely,” he said.

This morning Lees-Galloway said he lodged written questions in Parliament with Minister of Internal Affairs Peter Dunne seeking to know when Thiel was granted citizenship, under what grounds and whether the venture capitalist billionaire was a resident for tax purposes.

I am amazed that anyone from Labour has the temerity to speak out on citizenship issues after their near corrupt behaviour around Bill Liu getting citizenship. 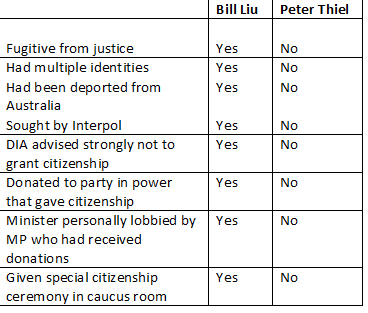 Thiel has actually been a citizen since 2011. He has been coming to New Zealand for over 20 years since the mid 1990s. Then Internal Affairs Minister Nathan Guy says he doesn’t even recall Thiel’s application but the files show that DIA were in favour of his being given citizenship.

Yes it is unlikely Thiel spent eight months a year here from 2006 to 2011. But he probably argued that the nature of his job as a founder and director of global Internet companies such as Paypal and Facebook made such a requirement near impossible to ever achieve.

I regard it as a great thing that globally successfully people want to live in New Zealand and be citizens of New Zealand.