With the second term of President Barack Obama about to end in five days’ time on January 20th, it is appropriate to look back on his Presidency and determine the success or otherwise of his terms in office. This analysis of the Obama Presidency will be broken into 3 sections over the next few days:

1 – Electoral impact of his Presidency on his own party’s electoral fortunes.

Back in December 2014 just after the disastrous 2014 midterm elections where the Democrats lost control of the Senate, I posted this http://wp.me/peNSN-nvg producing charts from renown University of Virginia Political Science Professor Larry Sabato comparing the losses of Congressional seats, State legislators, seats and Governorships under each 2 term President since World War 2. On the strength of results up to and including 2014, Obama had been the worst post war President in terms of the losses his party suffered under his Administration.

With the 2016 Presidential Election seeing the defeat of his Democrat Presidential successor Hillary Clinton and Republicans remaining in control of the both the House and the Senate, it is time to revisit the sum total of how his party has fared under his full 8 year Presidency. Please note that the last table is my work but I have tacked it underneath Larry Sabato’s previous tables and used his numbers for the previous elections (except for the 2008 Democrat senate numbers because for all of 2009, Obama had filibuster proof majority of 60 in the Senate until the Democrats lost the Massachusetts senate seat of Ted Kennedy in a special election in January 2010). 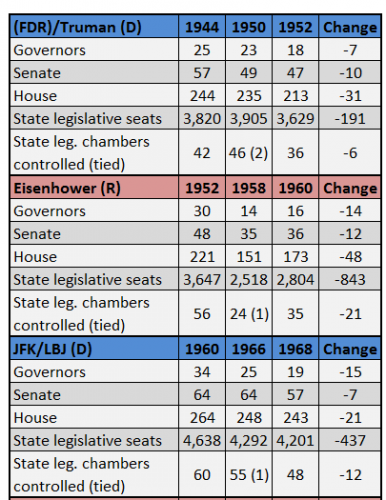 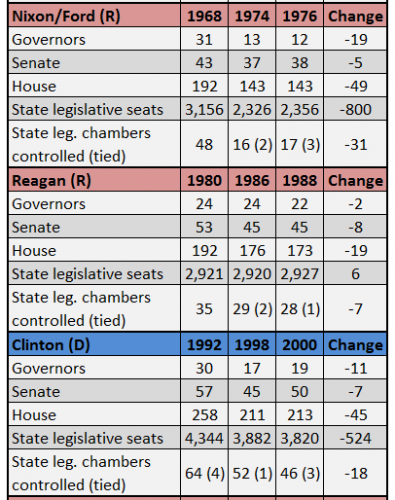 As you can see, Obama has presided over higher losses at EVERY level of government and, in the case of State legislatures (and their members), the losses have been staggering and close to twice as much in percentage terms as the average losses for a 2 term President.

By any electoral measure, Barack Obama’s Presidency has been a disaster. He has left his party out of power and bereft of a substantial bench of replacements at all levels of government. A final indicator of the dire plight the Democrats find themselves after 8 years of an Obama Presidency; in 2008 Democrats had what is called the trifector (control of the Governorship and BOTH State legislative chambers) of 16 states. This has plummeted to just 5 (California, Hawaii, Oregon, Connecticut and Rhode Island)!