Food prices are bugging people this winter. It feels like we’re being ripped off.
Part of the problem is that inflation is supposed to be low.

It is for TVs and phones and clothes and broadband plans. It definitely is for wages.

But food – and fresh healthy food in particular – hasn’t been sticking to the script.

Food prices rose 2.2 per cent in the March quarter but fruit and vege was up 16 per cent.

Food prices have spiked in the last couple of months, but this is not uncommon due to weather or other seasonal factors.

I had a look at what food prices have done on an annual basis for the last decade. 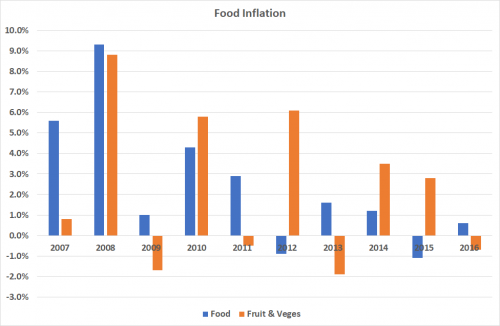 So I think Liam is premature in concluding there is a problem.