Te Reo Māori is not ‘critically ill’. It is spoken to the level of conversational fluency by three times the number of people who spoke it in 1900: about 130,000 people. It is being studied in preschool and school by 300,000 young New Zealanders. A further 10,000 are studying it at tertiary level.

Although it is an endangered language, Māori and other New Zealanders in their private capacities and the government are supporting its revitalisation. It is a growing part of our national identity. Mr Garrett asks and answers:

“Why did the Maori language effectively almost die out?

The answer given by – frequently white – university educated agitators is that it was “beaten out of them” due to the cruel honkey gummint. Incredibly, my daughter was told last year by her 23 year old teacher that Maori children were “beaten for speaking their language” as recently as the 1970s”.

Umm no; that is not what experts in universities say. They say that Māori has become threatened by a whole series of events. But it has proven itself to be extraordinary resilient in the face of these challenges. The wars of the 19th century, disruption caused to communities as a result of land confiscations, the exclusion of Māori language from education from 1857, the collapse of Māori newspapers without the financial means to start them again, the development of English-only print media, radio and television, the ‘pepper-potting’ policies in housing that prevented the development of Māori urban communities, the delay for two decades in a government response to the decline observed in the 1960s the exclusion of Māori language from tertiary study until the 1970s and the massive dominance of English in all public and commercial affairs are just some of the complex factors behind the language’s decline among Māori.

Language loss has occurred since language first developed in human society. But we have choices. Māori overwhelmingly consider it a good thing that the language continues to not only survive, but goes on to thrive. An increasing majority of wider New Zealand agrees.

I’m pleased that Mr Garrett’s relatives and local retailers are succeeding in passing on their languages to their children. So too are many Māori. A recent report from the Council for Educational Research (Te Ahu o te Reo) has shown clear evidence of this, and of the fact that this is happening in areas of the country where intergenerational transmission was thought to have died out in the 1970s.

The law about the Māori language was reformed in 2016. While it is affirmed as a taonga of the Māori people, the Maori Language Act now makes clear that te reo Māori is for all New Zealanders and a part of our national identity.

More and more non-Māori are learning a little Māori language and using a little. Others are learning more and using more. This includes members of cultures that are not traditional English speakers. Their use of Māori enhances its status as a force for national unity.

Mr Garrett points to the fact that Māori leaders of the past promoted monolingual education. So they did. But they did so before the great depression, the second world war, urbanisation and the rise of mass media. Their confidence in the future of language transmission in the home was misplaced. They should have looked at the massive infrastructure of teaching, publication, broadcasting and use that supports the English language.

Māori language week this year kicks off on September 11 with a celebratory parade through Wellington. I invite Mr Garrett to come with me and see the exuberance and enthusiasm held by many New Zealanders from many backgrounds for our indigenous language. It will be fun! 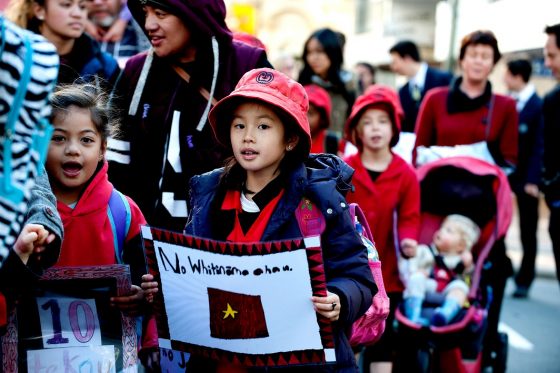 Image: Last year’s Māori language parade. The sign says “I am from Vietnam”.