A senior official at Wellington City Council has ridiculed a decision by councillors in angry social media posts.

He was critical of their decision a day earlier to consult with the public on a new bylaw that would ban the dropping of cigarette butts in the capital. 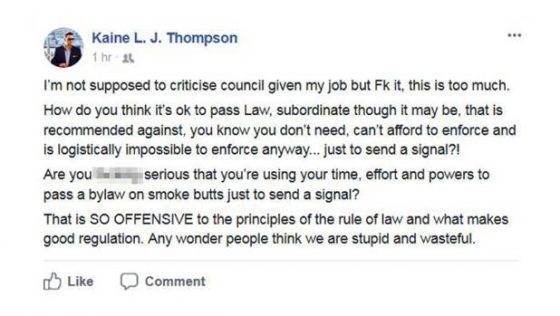 Kaine is quite correct that the Council decision is pathetic and stupid and shows that Councillors are more worried about sending a virtue signal, rather than good law making.

But of course as a Council staff member he should never have made the post. As an employee you can’t call our your governing body for stupidity, no matter how stupid they are.

Some councillors pushed for the bylaw to “send a signal” that it was not OK to throw away butts. However, a small group of councillors pointed out the new law was not needed as it was already covered by the Litter Act, and it would be near impossible to enforce because it requires an authorised official to witness someone discarding a butt.

So the bylaw was not needed and impossible to enforce but most Councillors didn’t care.