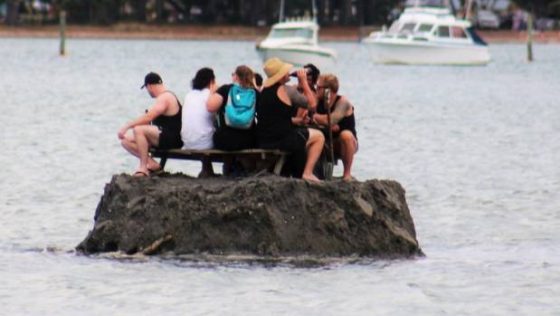 This group of New Year’s Eve revellers got busy at low tide on Sunday and spent the early afternoon building a sandcastle in the middle of the Tairua estuary, a holidaymaker, who asked not to be named, said.

A Coromandel-wide liquor ban is in place over the New Year period, which means no alcohol in public places, including beaches.

Once the crew’s creation was complete, they installed a wooden picnic table and chilly bin.

The tide soon came in and they cracked open a few cold ones, the witness said.

The photo was posted on the Tairua ChitChat! Facebook page and punters were keen to pile on.

Upon building their sandy fort, members of the group were reported to have said the liquor ban didn’t apply to them as they were “in international waters”.

The holidaymaker said the group was seen drinking into the night, watching the fireworks from the relative safety of their picnic table.

“That’s creative thinking – if I had known that I probably would have joined them.”

And what a great response from the local Police commander. This is why I love New Zealand.