For the first time since Ben was born I got to go out to a play, having accepted tickets for the opening night of Problems at Circa. 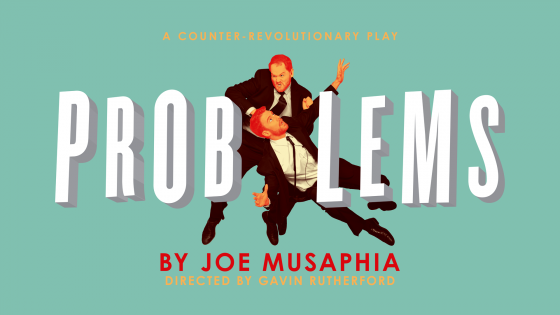 Circa One has been transformed into a hall of red, appropriate for a play loosely inspired by the Death of Stalin.

Two massive doors dominate the stage and after the lights go off and back on you see two suited men standing alertly at guard.

Stephan, played by Andrew Paterson, is a true believer in the revolution and the system. The other guard Boris, played by Simon Leary, is less of a true believer and more focused on his golf game. They grate each other at the best of times, let alone at this time when the Great Leader has over slept and is late for his speech to the party congress. Waking him is risky, both in terms of his displeasure but also by the fact he sleeps with a loaded gun in case of counter revolutionaries.

Exacerbating the tension is they each have a different top official they are close to. Stephan is close to Madam Great Leader while Boris gets on well with General Kleb who oversees the security services.

Problems is a very physical almost slapstick comedy. It aims to highlight the sense of paranoia and ridiculousness in a regime where there is no truth, and people who know too much get deleted.

The two actors are vigorous and produce many comic moments. It will appeal to people who like easy laughs.

For me though it didn’t meet its potential in terms of black humour. The overt physicality got somewhat in the way of the Orwellian state which is such a contradiction.

In a technical sense the play was well done – the light and sound effects were dramatic and there was a sense of tension as the time past the scheduled wake up kept getting longer. It was a fun production, but it didn’t quite connect on the emotional level.