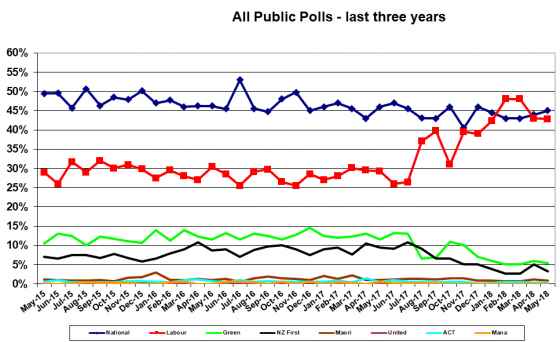 As you can see National’s support remarkably consistent.

The executive summary of the newsletter is:

There were three political voting polls in April and May – a Newshub Reid Research and two One News Colmar Bruntons.

In May National led Labour by 2% and were 1% ahead in April.

The seat projection for May was centre-right 59 seats, centre-left 61.

National’s party vote in May was 1% below a year ago and 5% lower than three years ago.

Labour’s party vote was 14% higher than a year ago and three years ago.

In the United States, Trump’s approval rating is a net 7% higher than a year ago

In the UK, The Conservatives have started to draw away from Labour in the polls and are currently projected to fall just short of a majority government.

In Australia, Turnbull has shown a big improvement in the polls in the last two months going from a -29% net approval rating to -11%.

In Canada, Trudeau is in real trouble having gone from a +7% approval rating three months ago to a -21% today.

We also carry details of polls on Winston Peters, M Bovis, petrol tax, superannuation and The Commonwealth as well as business and consumer confidence.