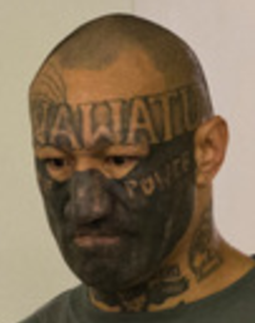 His second strikes were for two convictions for wounding with intent to cause grievous bodily harm, committed on fellow prisoners, for which he received a sentence of 7 years 9 months imprisonment, cumulative on his existing first strike sentence.  He and other prisoners attacked three others in a cell with improvised weapons, leaving one victim with a life-threatening neck injury.  He committed his second strike offences while in prison serving his first strike sentence.  The Judge said he would have imposed a 50% minimum non-parole period, if it wasn’t for Three Strikes requiring that the entire sentence be served in full without parole.

As a result, Wereta is certain to serve almost 4 years more in prison than would be the case without Three Strikes. Despite his serious offending he would be eligible for parole after just half his sentence.

Despite Wereta committing numerous violent offences while in prison and his long history of violent offending, the Judiciary have failed to protect the public by sentencing him to preventive detention, despite the Crown asking for that sentence in 2015.  Wereta has also attacked a Crown prosecutor while in Court.

His first strike offence was for the aggravated robbery of a suburban dairy, which he committed with his brother.  For that, and other offending, he received a sentence of 10 years 6 months imprisonment.  Aggravated robberies of dairies can have devastating consequences for the victims. Apart from the obvious violence suffered, the psychological impact is often huge, and financially can be crippling on people often barely able to eke out a living from running their dairy, working long hours, 7 days a week.  When sentenced for this offending in 2013, the court had to have 13 police and security officers in court to ensure Wereta and his brother, who was also being sentenced, behaved themselves.  Both were heavily manacled for the sentencing.

Damian Wereta has at least 76 criminal convictions, including at least 25 convictions for violent offending, and an unknown number of Youth Court convictions.  He is a gang member.  Aged approximately 38, a psychologist has assessed him at a very high risk of offending and creating new victims, whether in prison or out on the community.

Prime Minister Jacinda Ardern and Justice Minister Andrew Little want the Parole Board to be able to let him out early, which would allow him to continue his violent offending in the community, rather than in the confines of prison.

Under Three Strikes, Wereta will remain in prison, ineligible for parole, until at least September 2022.

His background is sad, but also makes you realise the chances of rehabilitation are so limited. His dad was a gang chapter president.  He was into drugs and alcohol at a very early age. CYFS got involved with him once he was seven. He never went to secondary school. He has fathered seven children himself. He appears to have never had a job.