A Grind Stone from the Time of King David

While lowering the floor level of 82D John and I discover in situ this black obsidian grind stone (below) dated to the time of King David.  It is awesome to uncover an object that was onsite when King David was in this city, which you can read about in the Bible in 1 Samuel 21 (it is the city where he feigned madness).

“That day David fled from Saul and went to Achish king of Gath…But the servants of Achish said to him, “Isn’t this David, the king of the land? Isn’t he the one they sing about in their dances: “‘Saul has slain his thousands, and David his tens of thousands’?”…David took these words to heart and was very much afraid of Achish king of Gath…So he pretended to be insane in their presence; and while he was in their hands he acted like a madman, making marks on the doors of the gate and letting saliva run down his beard. Achish said to his servants, “Look at the man! He is insane! Why bring him to me?”

In addition I uncover two human-worked square stones, the size of Ebla tablets.  One appears to be a knife sharpening stone with ridges, the other some sort of cribbage game perhaps, with carefully drilled holes to hold sticks. All are bagged as ‘special items’ for Jeff and Aren to examine more closely later in the lab.

Shade is vital and you can see from the images below how we erect it, with large PVC grey pipes. It is dropped each night during pack down. You simply cannot work without shade.

Below is an image of one of the cubby holes in the ‘E’ of the extant gate structure (the area immediately behind the table).  We have broken up the soil with the pick and are now squaring off with a tourea before processing the soil.

Israel has lots of interesting animals and insects.  As the shade cloth is dropped at night it captures dew which drips under and this attracts toads who crawl into and become trapped inside our squares.  We catch them and release them into the dry wadi each morning. There are also large lizards, praying mantis, large wolf spiders, and a curious array of beetles, that Lucy (in the white tee, above) and I take special interest in.  On day 1 as we were doing the Tell tour an eagle came soaring over us.  Of course we find a lot of bones, principally of kitchen debris (sheep, goats, bovids, donkeys, but also mice and rats). We even find one human tooth and I almost uncover a skull.’  An Ottoman soldier skeleton was buried across our square and was removed earlier when the layers were higher.  He appears to have been buried inside the ‘Nixon Watergate’ area (which of course had been filled in, millennia earlier by the Philistines, so was just ground to the Saladin warriors and Crusaders). 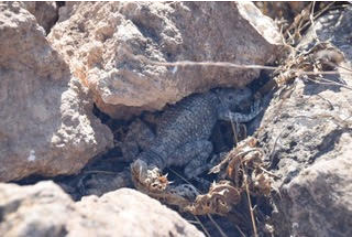 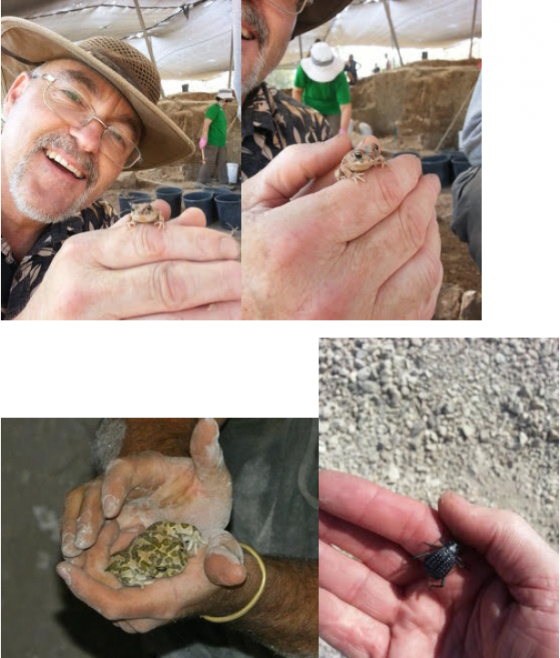 Here’s a video compilation from the dig today… https://videopress.com/v/Wutiq8lk
Kicking Someone’s Ass/Arse with an Ass

My Russian colleague in Area M Olga Primakov explains Samson and the donkey jawbone in a post (below). Re the killing of 1000 men, it is likely this is an idiomatic prose adoption, as in “killer of thousands, or killer of ten thousand” in the same way we might say, “I’ve watched millions of movies.” It means “Samson killed a lot of Philistines.”  Was he really counting Romans like Obelix?  Alternatively, it may refer to Samson leading an attack on the Philistines with a band of fellow Hebrews and killing about 1000 warriors in the battle or 1000 over several skirmishes. He may have used a jawbone as a symbol of his defiance (like the Venetians invented the crescent – croissant – after the Muslim siege of Vienna, and adopted by the Parisians. Or they ride into their battles on donkeys. One does not necessarily need to read the text as literal, as Samson is heroic epic prose that is making a point about God v the gods, and the Hebrews v the Philistines. 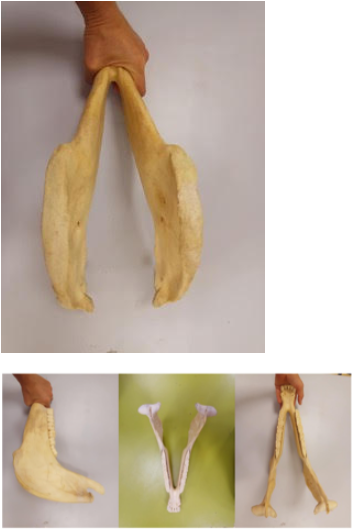 “Again I’m about bones. This time in my hands is a donkey jaw, modern, not found. But if it’s sharpened, it’s a pretty scary weapon, like a double-knife. Remember Samson?

Samson lived in an era when such a weapon was common among non-metal sons of Israel. The tools of labour and weapons were made of copper, silicon, bone and wood. On the accuracy of the Bible reference and the definition of “fresh” – fresh bone is strong, as the sun and rain breaks down the bone. In the Iron Age, camels or horses were not available in this region. All trade was done with donkeys. During the excavation in one of the past seasons we found a donkey’s burial. Maybe the donkey was a Philistine cult animal. Then Samson’s action with the ‘jaw bone of an ass’ is highly symbolic.”  [John: A bit like killing Goliath with his own Philistine sword, as David did].