After a full days excavation (5am – 1pm) we gather up the pottery buckets and nurse them home on the bus.  Each bucket has two tags attached that record vital data about where and in which layer the finds came from. The buckets are filled with water and left to soak overnight.

The following day a soaked bucket is taken and paired with a bucket of clean water, and each sherd is carefully rinsed and cleaned with a small nail brush.  One has to be careful with this, as valuable painting can be scrubbed off, so thumbs are often used to extract stubborn clay.  Amazing wonders emerge and the washed pieces are carefully laid in a tray to dry.

The second bucket tag is carefully attached to the tray at the beginning, and when the bucket is finished, the second tag is removed and laid in the tray as well, weighed down by the largest artefact.  These are then laid out to dry as shown for a further 24 hours and the buckets removed for reuse next day.

24 hours later, the chief archaeologists take each dried tray and ‘read’ it with its square supervisor.  I tag along to learn as much I can about ‘reading’. There are many many trays to read through and document and it takes hours.

What we are looking for in each tray, are: lips, rims, handles, decoration, unusual forms. The chief archaeologists grade each selected piece which is documented on a detailed chart by the respective square supersaver:  “three Iron Age 1;” “one late Bronze-Age;” “four Iron Age 2;” “6 Ottoman,”etc.  These items are totalled and bagged with the two bucket/tray tags for later photography.  Much of the tray is then discarded if the pottery sherds have little to contribute. For example, late Ottoman or Hellensitic pieces from the fill are of little value, and are added to our pottery graveyard, re-interred later back in to the Gath site.

The team have a specialist reconstructor who is an expert at reconstruction, where we can find enough pieces of a vessel to rebuild it in whole or largely in part. This is done in the off-excavation season outside June-July.  It takes about ten months to process all the data of a 4-week excavation season. So, it’s not about discovering as much as you can, but processing material in an ordered and disciplined way.

Below: My colleague in Area M Olga Primakov from Russia and Tel Aviv, with a particularly nice indicative Philistine bi-chrome bowl rim after cleaning. Note the red and black patterning.  This is classic Philistine art. 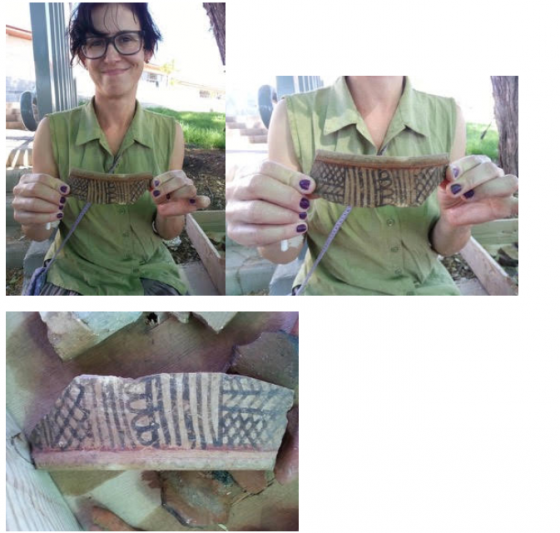 As we settle into late-Week 2, we are directed by Dr Chadwick to remove the west side balk as well, and work this down to our current floor level (below). This will eventually join 82C East and 82 D and 82C West together as one long rectangle of exposed data. 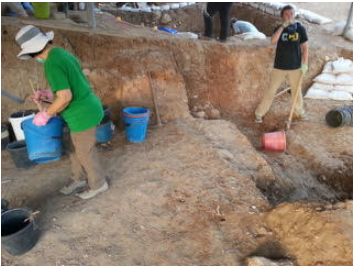 Here too as with the east balk we discover a clear termination of a clay brick wall in the back (right of the blue bucket).  In the image (below, left, above the two floor stones) you can see the clear vertical demarcation of the grey fill (left) and the brown clay brick (right). I remove this carefully with a trowel using a plum bob to get a correct vertical line. This is then carefully photographed.  At the bottom are large foundation stones from something else that carry through under the balk behind us where Caleb and Justin are doing some heavy pick work.

Note how we’ve sandbagged the very bottom of the extracted west side balk.  This is to protect this layer. You can also see clearly the stairway emerging as we’ve lowered the floor (centre, between the two big stones).  I discover a series of stones and pebbles in this floor in the middle of 82D this side of the stair, and Jeff examines this and concludes this is the Iron Age ground level of the gate; a compacted clay path, so we stop. Around the edge we discover some protruding rocks that delineate the curving edge around this stairway path.

After two weeks, we have determined the following – the goal of the 2018 season.  That immediately opposite the ‘E’ foundational structure is a snaking pathway that is flat with intervening triple steps.  It leads uphill and turns south into the lower city towards the Tell in line with the human trail up onto the Tell (probably the same trail used for thousands of years following the easiest contours of the terrain).  Heavy work in the square behind us uphill, by Caleb and Justin, has determined finally there is no mirrored ‘E’ structure opposite, as theorised. Rather, the intact Canaanite domestic buildings (likely two stories high) formed the south side of the ‘gate.’  This recalls the biblical story of Rahab at Jericho who had a house in the wall by the gate.  She was less likely a prostitute, more a Bed & Breakfast custodian (see Joshua 2).

It is likely the Philistines found that they did not need a second gatehouse bastion and simply used the Canaanite housing on one side, and erected their defensive ‘E’ bulwark on the more vulnerable north side.  There is also a rounded tower next to it (below left, extending off the ‘E’).  Here’s a summary drawing of what we have uncovered in the first two weeks. And some images of D2 after it has been cleaned and cleared in Week 3. Immediately below, after Alice’s balk has been reduced, the stairway becomes very clear. David, Goliath, Achish and Saladin would all have walked this pathway.  I discovered and excavated the large rock to the right (pic 2 below), inside the east-side balk, that frames the right hand side of the stairway. 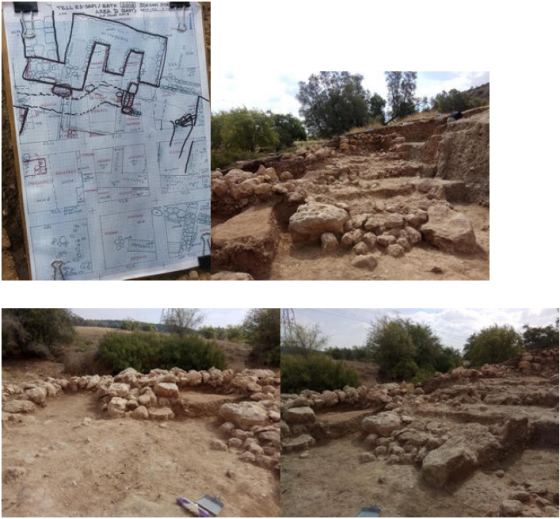 As we excavated the west-side balk, again many finds.  But like in the east balk, we discover this fab. brick clay wall. Balk Photographed in the right light, you can clearly make out the clay bricks in the back wall of 82D above the west balk. We were able to carefully extract some of these after 3500 years from the surrounding debris. It is valuable architectural data.

By Thursday of Week 2 our work in 82D is largely done and I move over to Area M elsewhere on the Tell.  This is a new site.  At ground level and is only pegged out and the surface broken this season.  Within 5cm we start making archaeological discoveries and it becomes clear, Aren maker’s strategy dig this season in the lower city not up high on the Tell has struck pay dirt.  We’ve uncovered the 830BC Hazael of Aram destruction layer indicated by anomalies on the 2017 remote sensing survey and drone work.

And below is Dr Seth Rodriquez (right) and some of his team of Coloradans, and displaying several of the sedimentary floor layers inside their square, where successive centuries of people have lived and died.

Within minutes of excavating with my colleague Olga Primakova, we have uncovered several vessels just below the surface, exactly where they fell in 830 BC and have remained undisturbed ever since.  This later becomes as good as archaeology gets.  82D is now done, and next post I’ll do a quick survey of my brief work in Area M and show you some of the incredible finds.