By John Stringer on site at Tell es-Safi, west of Jerusalem.

[It is not kosher to publish excavated objects before they are properly processed and published as part of the excavation, so I’ll not do that without permission. But you’ll get some generic images; and where I get permission from Professor Aren Maeir I will provide Kiwiblog readers early bird images of some of the fascinating discoverers where that is permissible]. 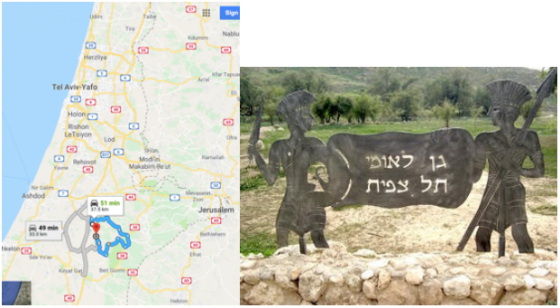 This is my first visit to Israel, so I suppose first impressions count. And that means airports.  Contrary to my experiences in America or Asia, Tel Aviv airport is quiet and un-bustling. It’s framed by modern glass and tubular aluminium architecture much like Christchurch international. Customs is uncomplicated and efficient. As soon as I mention “archaeology” and “from New Zealand” it’s a green pass and waved through with a smile. But the absolute first impression is the heat. It is BAKING! Like Arizona or Texas. And jumping from -2 C the day I left Christchurch to arrive in 40 C+ is a shock, if 30 hours of travelling NZ-HK-TelAv was not enough!
The soil is a golden dusty sand with patches of red Aussie Outback ochre. Thrusting up through this, I am greeted by BladeRunner architectural phalli (Harri. Ford or Ryan Gosling versions – take your pick) that bespeak modern Israeli confidence and innovative
commitment to modernity, technology and forward thinking in a country steeped in the oldest of Pasts. 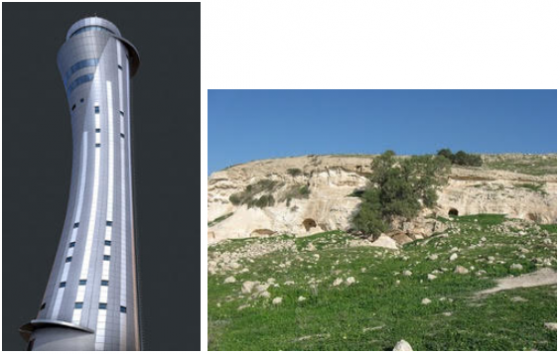 I flew Cathay Pacific because Emirates don’t fly in to Israel.  I hope that’s not an anti-semitic thing (like the Lorde ban!). If so, so much for being our Americas Cup national yacht sponsor! In the first 2 weeks of July 269 rockets have flown into Israel from Gaza as well as condoms on parachutes full of petrol; flying Molotov cocktails to burn away local Israeli crops and foster fires. There is silence from the UN (typically). How this helps “build” a Palestinian state is indicative of the blinkered and inept Palestinian governmental-political edifice.

The hotel I am staying in, is not a good first impression. The Russian on the desk is Basil Fawlty in a dress…with an overused cellphone.  “You cannot check-in until 2pm!”  It is 9am.  So I leave and go walkies. Tel Aviv is a busy, grimly, rundown, quickie modulated-concrete pop up city. Arriving back dead on 2pm she says “another 40 minutes.”  Decidedly unhelpful, unsmiling and uncommunicative, she takes phone calls and chats while we’re trying to process check-in. This takes twice as long as it should. The eftpos takes 5 attempts to work. I have to ask for a receipt but never get one because the printer isn’t working.

The room is up three flights of that ghastly sharp-edged corporate marble that hotels so like.  There is no lift. Quite how older people are expected to haul their luggage up these steps is beyond me.  Ms Millennial Russian Cellphone does not offer to help.  She shouts at an Asian woman who is cleaning down a corridor.

The shower leaks into the toilet area. The clock doesn’t work. A light switch is broken. I cannot find any channel on the TV at all.  There is no “Hello Welcome to Tel Aviv” smiley smiley guest folder. Online I am told there is a mini bar.  There is an old fridge by the bed, but it is empty.  It is not switched on.  There is a jug, but no cups to use or coffee or milk. So, you use the jug as a water bottle?  There is no toilet paper holder.  I booked this hotel because it advertised a free shuttle to/from the airport.  There is no shuttle and I’m down $150 shekels for the cab to this Wonderland.

In a sentence:  DO NOT STAY AT LEGUARDIA, TEL AVIV. They asked me for an online review.  There it is.

Tourist walkabout (while my room was being built) was to Carmel market.  This is a narrow lane of produce and vegetable stalls.  There is pineapple, pomegranate and all sorts of sacks of exotic spices.  The people are exotic and some spicy.  By 9.30 am it is already full of people, locals mainly, buying garlic and ‘shout-talking’ to each other as Middle Easterners do. Love it.

I am a day early for the dig, because Cathay Pacific have changed seasonal scheduling and only fly into Israel on the Friday.  It is also šabbāṯ (which in terms of public transport varies anywhere from 4-8 pm depending on the season) so be aware of this regarding buses and trains not running in modern Israel, and plan your trip accordingly. Check bus and museum timetables etc before you leave, ahead of any sabbath shutdowns. It’s a pain, but the price of Netanyahu building an accord with conservative Israel groups in order to have a conservative coalition government.  They have Orthodox Jews we have a Maori in Gucci and a PM in hospital having a baby.

So, I’ve set aside this Saturday to visit Eretz Museum which is listed as Tel Aviv’s finest.  It’s ok, not as good as Canterbury Museum, but I’m here to see Philistine pottery in the flesh – and they have LOTS of it. The museum is also built around the famous archaeological site of Tell Qasile which you can visit. It’s just too hot to go outside and wander around an archaeological site I’ve longed to see.  Air-conditioning is my new religion and I do strict abeyance. But, the pottery is amazing. I drool over painted late Bronze-Age transitional Iron Age Cypriot ware and reiterate my pet-theory that the Philistines were in fact displaced Mino-Mycenaean Greeks (post Troy siege), who migrated or fled (as a “conspiracy in their islands,” to quote Ramses III) through diminished Crete, Rhodes, Lydia, Hatti and Cyprus, fetching up by boat and ox cart in Canaan and the Egyptian delta where they met Rameses III’s “wall of spears.”

Here’s a selection of images from the Eretz Museum. Well worth a visit. The Philistines were very playful in their art, both painting and in plasticised appendages to their pottery and sculpture.  Lots of zoomorphic and floral creations.

Next post: Week One at the Tell of Gath.